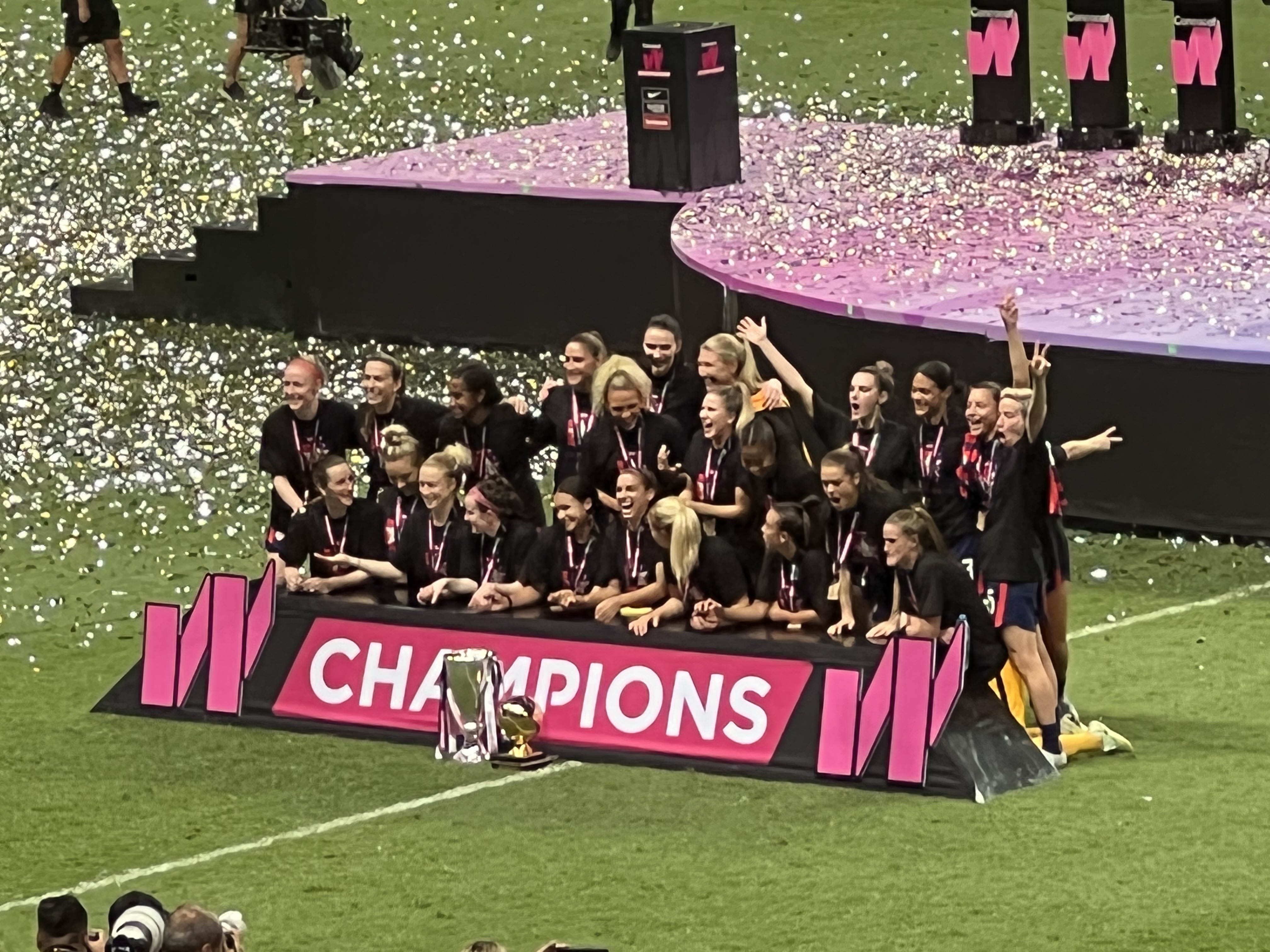 July 19 – The BBVA Stadium in Monterrey, Mexico, was rocking for the clash of Concacaf’s giants, World Champions USA and Olympic Champions Canada.

It was the final that everyone had expected and most had wanted to see. The US and Canada had dominated the competition from the start and they worked their routes to the final, neither team conceding a goal.

The US still haven’t conceded a goal, taking the regional honours and the automatic slot at the 2024 Olympics in Paris with a 1-0 win delivered by an Alex Morgan penalty.

It was sweet revenge for the US over the Canadians who beat them 1-0 in the semi-finals of the Tokyo Olympics last year on their way to the gold medal. 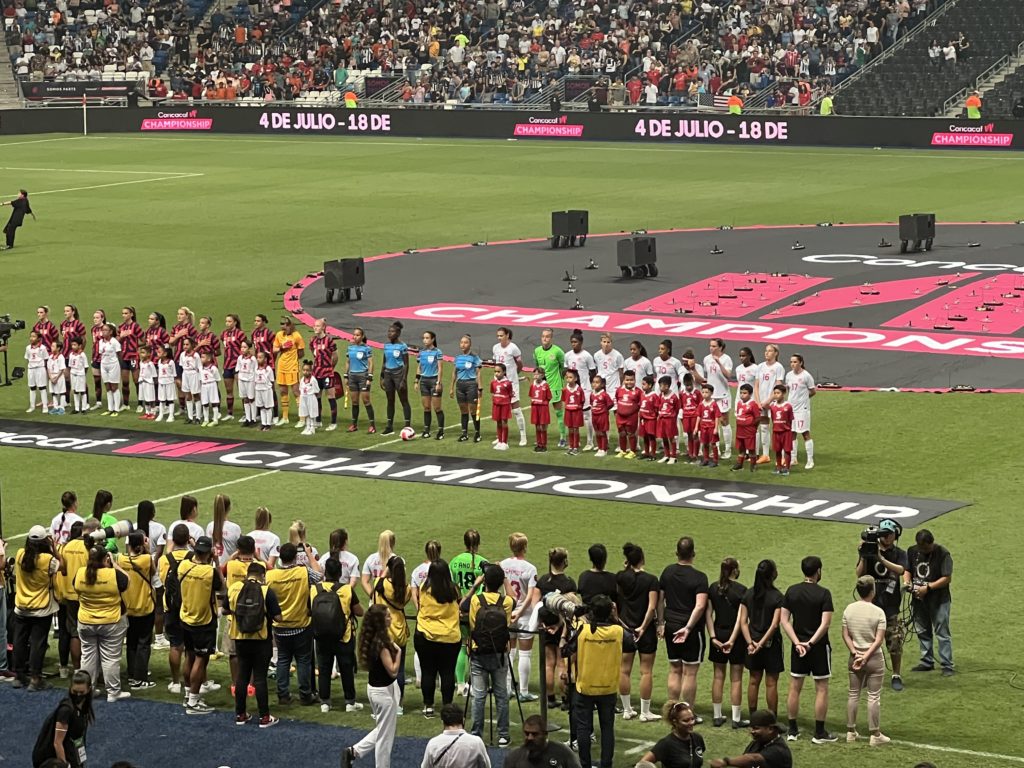 After a spectacular pre-game show that saw Skip Marley perform the tournament’s anthem, it was over to the US and Canada to entertain a good-sized Mexican crowd who had turned up to see some of the biggest names in women’s football.

The US opened at a blistering pace and within a minute Mallory Pugh had a shot palmed away at the post by Kallen Sheridan.

Moments later Sophia Smith fought off challenges on the top of the box to square to Morgan  who curled the ball just wide of Canada’s post. 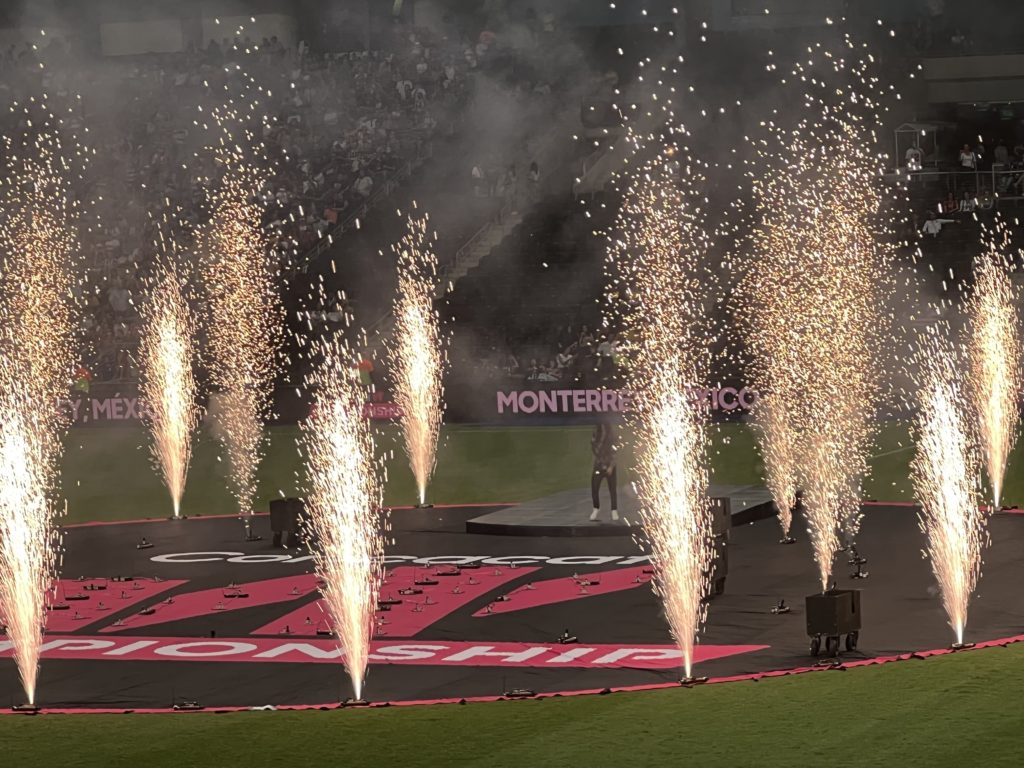 The US were attacking in waves and seemed unstoppable. Lindsey Horan, dominating the midfield, had a shot blocked from the edge of the box.

Canada were desperate to relieve the pressure and Nichelle Prince brought them some breathing space on the left, beating her defender to get into the box but driving her shot into US keeper Alyssa Naaher’s arms. A minute later she did the same again. T

The match was only seven minutes old, and the pace was relentless.

After the US burst of intensity, Canada started to get a foot in the game. On 16 minutes Prince again drove in between two defenders on the left only to have her shot deflected on to the roof of the net. Janine Beckie’s corner was palmed over by Naaher.

On 20 minutes Jessie Fleming fired over from the edge of the US box. 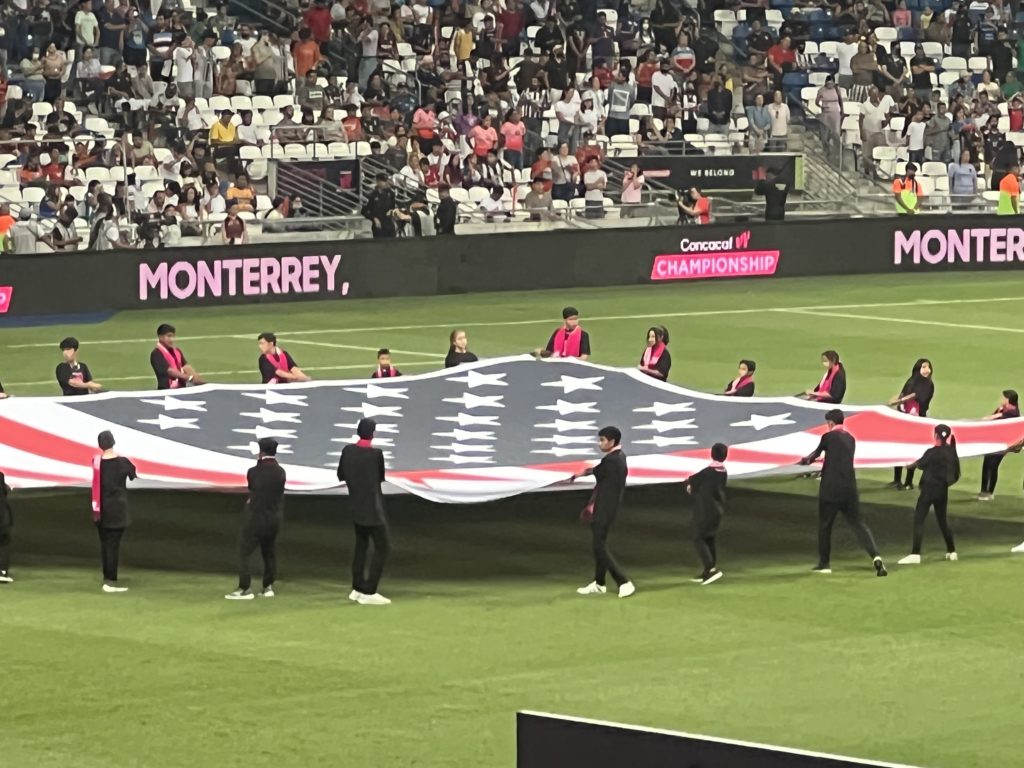 Both sides were wasting chances without really testing the keepers until on 30 minutes, after a period of sustained pressure from Canada, Pugh picked up the ball in her own half and drove towards Canada’s goal. Her shot from the top right hand side of the box was brilliantly caught by Sheridan diving to her right. Sheridan went on to collect the tournament’s golden gloves award.

On 33 minutes the Mexican wave began to ripple round the stadium. The US seemed to flow with the wave into Canada’s box with Alex Morgan’s movement only broken on the whitewash. 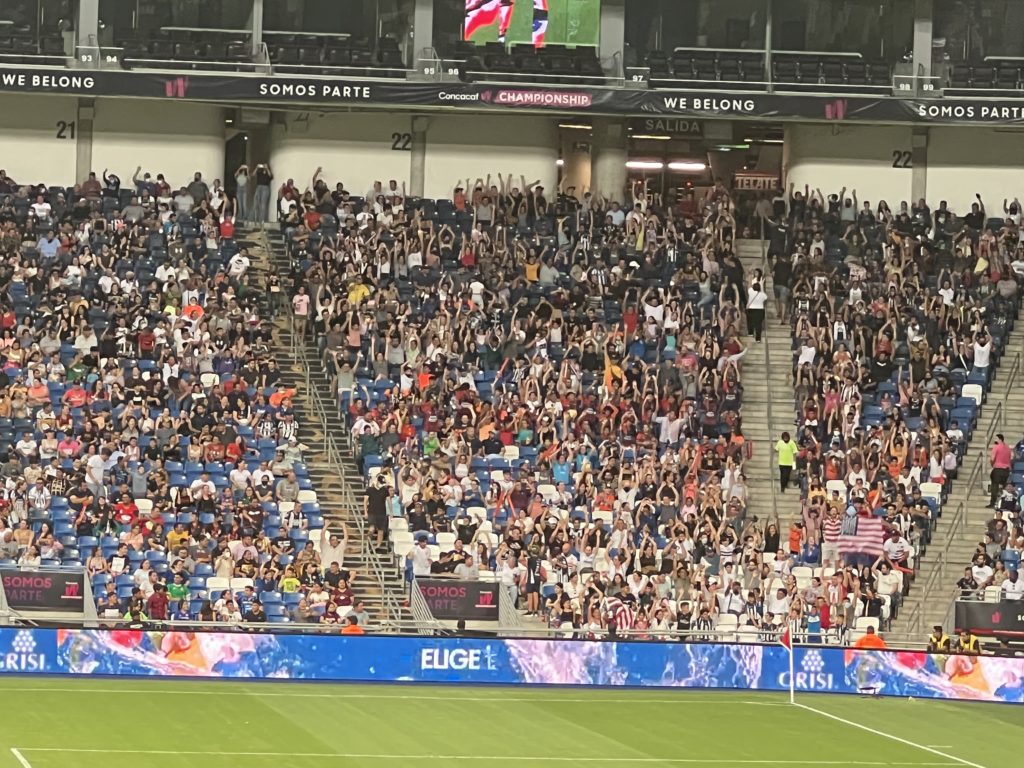 Five minutes later another US counter-attack went to waste with Pugh lifting the ball high over the bar. It was followed by a Rose Lavelle burst to the byline but no-one could get on the end of her cross. Lindsey Horan was booked for a well-executed rugby tackle as the Canadians tried a counter-attack of their own.

A minute before the break the US worked the ball down to right with Sofia Huerta drilling a cross low into the box aiming for Morgan and Pugh. In the goalline scramble Sheridan came away with the ball.

The US started the second half with the same intensity they began the first with Pugh, Morgan and Smith pushing high.

An injury to Canada’s Jayde Rivere on 54 minutes and another to Vanessa Gilles brought brief respite from the US pressure. But it was only brief. 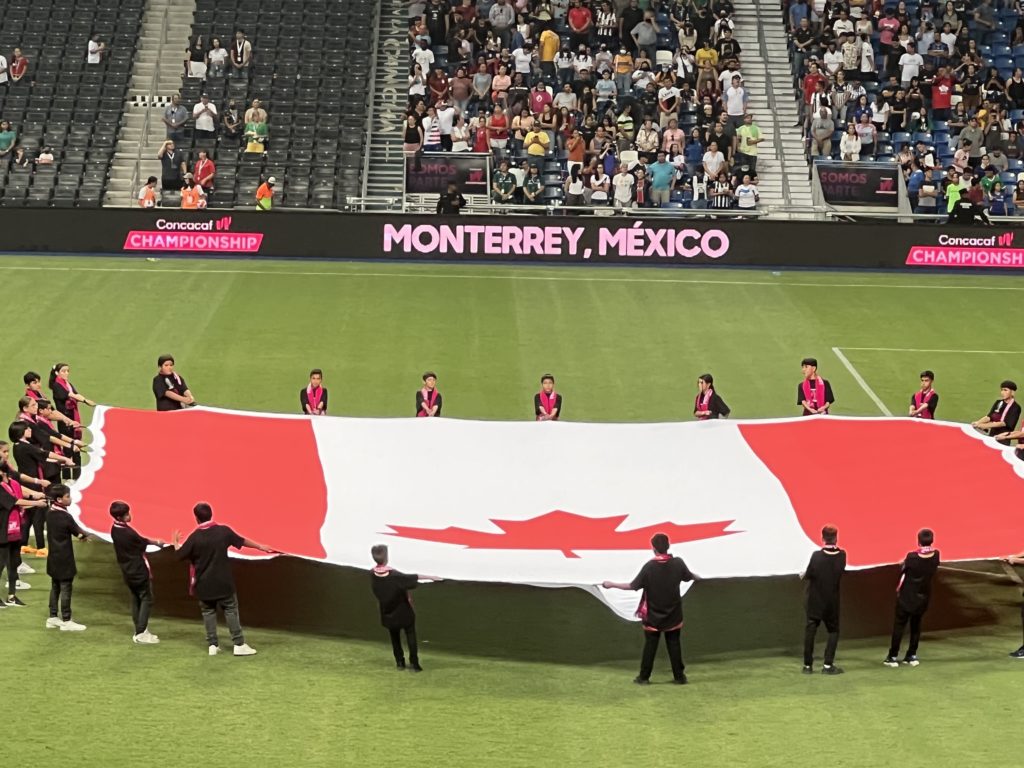 On 63 minutes the US had their best chance with Sophia Smith put through on the left but dragging wide. Canada were regrouping but the US turning up the hear again as a Horan cross bounced over incoming attackers and Rose Lavelle fired into Sheridan’s welcoming arms.

Canada sought to change the flow of the game, bringing on West Ham winger Adriana Leon and OL Reign striker Jordyn Huitema in a bid take the game back into the US half. It almost worked immediately but an Ashley Lawrence shot was easily gathered by Naeher.

At the other end Pugh won a free kick on the top left of the box but Horan fired wide and high. So did Andi Sullivan a minute later.

On 75 minutes the US pressure won a penalty.

Lavelle, through on the right and heading towards goal, was brought down by an Allysha Chapman push in the back. The referee pointed straight to the spot and Alex Morgan stepped up to send Sheridan the wrong way. 1-0 to the USA. 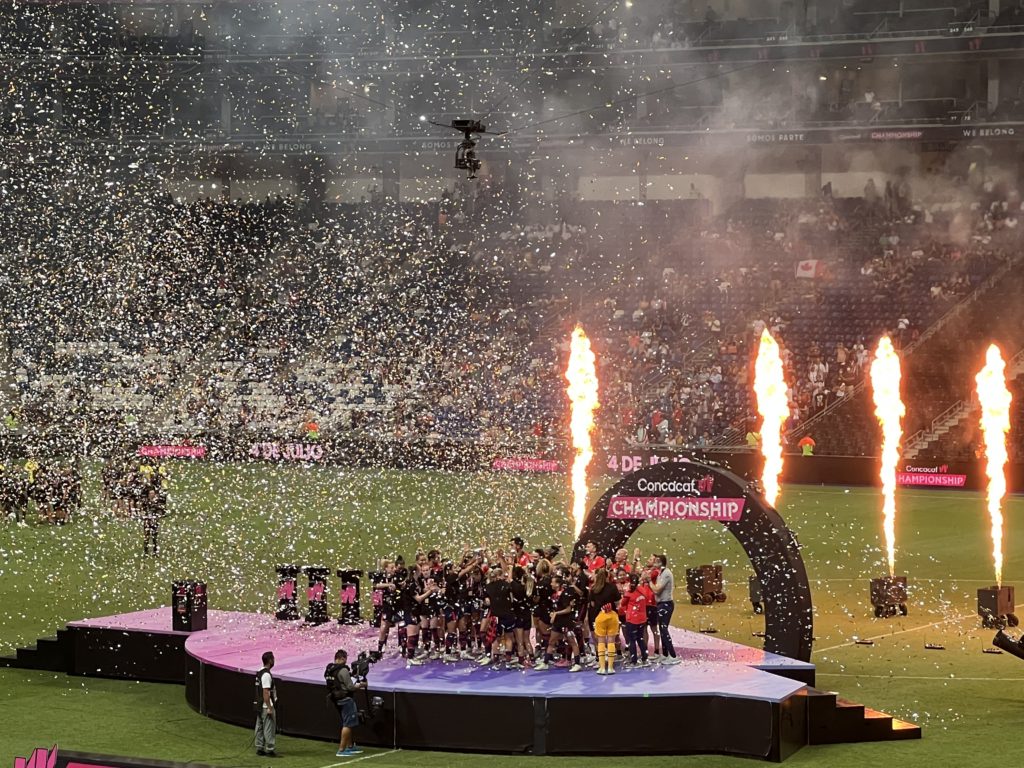 Canada weren’t giving up and increased the pace of their game, pushing their forwards higher up the pitch. A Huitema header looped over the bar on 80 minutes.

Suddenly the pattern of pressure was reversed with Canada frequently getting four strikers into the box and Naeher having to gather a long shot from Fleming on 82 minutes. On 86 minutes Lawrence fired over from the left inside the box. A minute later a cross from the left was headed over by Huitema.

Canada were running out of time but they hustled and bustled to the end with the last touch of the match being a Julia Grosso shot that was calmly caught by Naeher to ensure the championship win for the USA.

The final wasn’t just a superb example of the heights the elite women’s game is reaching, it was an example of how spectacular a 1-0 win in football – whatever your gender – can be.