Whatever happened to compassion, understanding and taking each case on its merits?

The recent decision by the Africa’s football confederation to ban Togo from the next two editions of the African Nations Cup following their withdrawal from the tournament in Angola was so mean-spirited it bordered on the immoral.

Few could argue with the fine imposed on the West African side. Some kind of penalty had  to be incurred no matter how terrifying the circumstances of the terrorist attack on the Togo team bus.

But the decision by the executive committee of Confederation of African Football (CAF) to kick Togo out completely should be greeted with disgust by every fair-minded fan.

Rules are rules, I hear some people say. Togo’s decision to pull out of the event so disrupted proceedings that the tournament lost its credibility, those same people may argue.

Don’t make me laugh. If you want to talk about credibility, look at the majority of games following Angola’s elimination from the tournament. Half-empty stands, weren’t they?

Adebayor’s claim to a French newspaper that CAF President Issa Hayatou had “completely betrayed” the Togo squad may have been made in the heat of the moment but you can understand his anger.

After all, three people were killed in the January 8 attack which occurred while Togo were en route to the team hotel two days before their opening match. There followed a period of confusion as to whether the players wanted to play on, but they were ultimately called home by their Government having decided themselves they wished to stay. 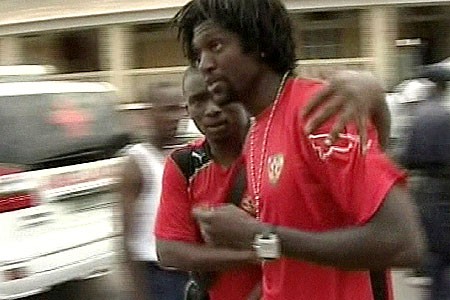 CAF deemed that amounted to political interference, something that FIFA abhors. Normally they are right to take a stand against such dangerous practises but this case surely amounted to force majeure. Can you imagine the state of mind the Togo players would have been in had they gone ahead?

Organisers of the Nations Cup stressed at the time that the Togo team disobeyed advice not to travel by road in the most hostile parts of Angola. Maybe they did but is that enough to ban them? One wonders whether Hayatou would have been quite so keen to apply the rules if his Cameroon compatriots had been subjected to the same frightening experience.

And what of the FIFA President? Sepp Blatter has often trumpeted the need for fair play in football. He is proud of the work his organisation carries out on a day-to-day basis in Third World countries. Given both these scenarios, why not make a stand, overrule CAF’s decision and re-instate the Togo team for next time?

The show must go on, according to the old cliché. Terrorism must not be seen to be victorious. But there are times when applying the letter of the law seems utterly vindictive. The show did go on, albeit without Togo. Banning them from the next two Nations Cup tournaments will do nothing to enhance goodwill and serve only to fuel resentment and hurt.