The national stadium is supposed to represent the maximum a country can offer, an iconic venue that provides the best possible platform for deciding the outcome of the most important fixtures.

A venue that should give players the freedom to express themselves, managers the ability to change tactics without fear of accident and fans the unique experience of watching football at its most expansive.

England’s 2018 World Cup campaign team have made great play, during their travels round the world, about how the stadiums selected to stage the tournament will be second to none.

Wembley is top of that list and by 2018, no doubt the surface will indeed be impeccable.

Plenty of time to put things right, then. But what kind of message, with the 2018 vote just eight months away, will be sent out by the debacle witnessed last weekend when the FA Cup semi-finals, screened round the world, at times descended into farce as a result of the treacherous Wembley pitch?

I make no apologies for being a diehard Tottenham Hotspur fan. Had Michael Dawson, the Tottenham captain, not slipped over on a surface that rendered even the most sophisticated boot technology redundant, my beloved team would almost certainly now be taking its place in next month’s final.

But that’s not the point. The point is that selecting Wembley for the semi-finals in the first place, within 24 hours of each other, was always going to be a recipe for disaster on a pitch that has become a standard joke. Far from providing the best possible conditions, both matches showed up the playing area for what it was: not fit even for an non-league kickabout. 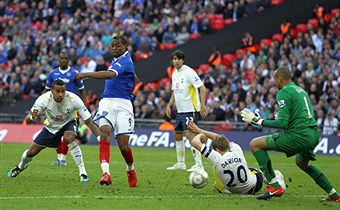 Imagine what those watching round the world would have thought as they witnessed highly skilled players slipping and sliding and trying to maintain their balance at the home of English football.

And imagine also what FIFA’s top brass might be thinking in the wake of a barrage of criticism - not just from those representing the four teams contesting the cup semifinals but also from experienced groundsmen and the head of the Professional Footballers Association.

But Wembley’s main attribute should surely be about players being able to stroke the ball around without fear of falling over.

The pitch, remarkably, has been relaid 10 times since 2007 yet still can’t come up to the standard of a single top-flight ground. Disgraceful - a description used not just in this column but by the likes of Arsene Wenger and Sir Alex Ferguson.

What, would someone please tell me, is the problem? Surely with technology at its most sophisticated, something can be done in terms of drainage, air and sun to provide a grass pitch to be proud of.

Other newly built arenas around the world prioritise an optimum playing surface but England’s national stadium continues to prove unworthy of its name almost every time a major game takes place.

Wembley is supposed to be the cornerstone of the 2018 bid when it comes to iconic footballing venues leaving long-lasting legacies. Yet one leading groundsman describes the pitch as an “embarrassment on a global scale”.

The FA have been at great pains, ever since Wembley was rebuilt, to make sure the stadium pays. Now, with increasing urgency, they also need to make sure players can actually stand up.