Can Sepp Blatter turn round the fortunes of FIFA like Juan Antonio Samaranch once did the International Olympic (IOC)?

To even pose this question shows how far we have come from the dark days of the Olympic Movement back in 1998.

Also, it shows how much we now need to re-evaluate the role of the Spaniard.

Indeed, we need to move away from the caricature of Samaranch being just a lackey of Franco, the Spanish dictator, who only looked after himself and had no vision of sports and left no legacy behind.

I was particularly struck by this when I recently interviewed Jacques Rogge, Samaranch’s successor at his offices in Lausanne.

Our meeting took place in the shadow of the FIFA corruption crisis and with Chuck Blazer, living up to his image as an Old Testament prophet, providing damning evidence of bribery and corruption implicating Jack Warner and Mohamed Bin Hammam.

In the wake of the FIFA corruption scandal, the IOC had been heaped with universal praise for getting rid of its corruption.

So could FIFA learn from its older Olympic brother?

I reminded Rogge of that day in the IOC headquarters in Lausanne in December 1998 when events took place, not far from his office, which were to prove so dramatic.

That is when the Swiss IOC member, Marc Hodler, proved to be the most devastating whistle blower.

Coming down from an Executive Board meeting, he made all sorts of statements to the media about Olympic corruption.

Rogge, who had just been telling me of his love for cricket, paused and recalled: “We were in the middle of an Executive Board meeting.

“What we heard was Francoise Zweifel [the then IOC secretary general] whispering something into the ear of Samaranch.

“I don’t know the exact wording, but that there was a press conference going on.

“Samaranch then said, ‘My dear colleagues, there seems to be a press conference downstairs and we will suspend the meeting and resume later on.’

“And I remember very well, because we were on the level of Pierre de Coubertin, going to the balcony and seeing the media listening to Marc.

“Yes, of course, I was surprised.

“I had big concerns, but I did not know the extent of the damage caused.”

The damage caused was extensive and the IOC was engulfed in a crisis as great, if not greater, than the one posed by the boycott of the 1980 Moscow Olympics by the Americans and many other countries.

But, and this is significant, Rogge goes on to highlight how Samaranch (pictured below left with Blatter) reacted to the crisis. 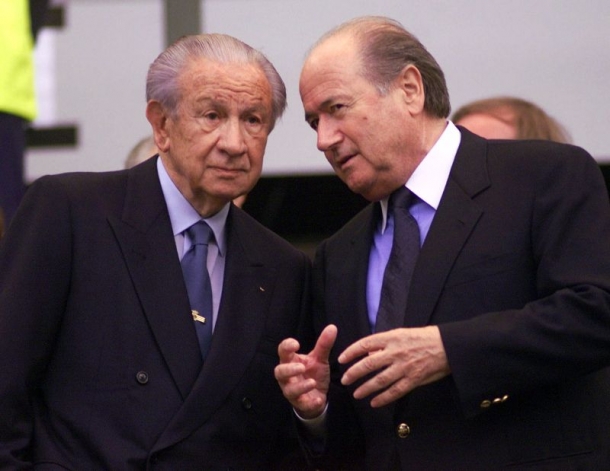 That, he is certain, made all the difference.

“When we came back, Samaranch immediately said we have to cut to the bone, ‘I make a commission and you must make proposals’,” Rogge continued.

“At the same time he said, ‘We have to look at the long term issues’.

“He did not speak at that time of the long term changes to the IOC because he wanted to know exactly what had happened.

“We gave him pretty quickly an overview of the whole situation.

“We had a meeting on the same day in Lausanne, downstairs in the office of François Carrard [the then IOC director general].

“A couple of days later we were called to go to New York because we had the evidence of the Salt Lake City Bidding Committee that was repatriated to the law office there.

“So we went to that, and then we had a couple of further meetings in Lausanne and gave a report to Samaranch saying these are the recommendations that we need to implement.

“And Samaranch called an extraordinary session of the IOC.”

The changes took time, during which the IOC was under intense attack from Governments all over the world.

Rogge is also careful to point out that Hodler’s whistle blowing cannot be compared to that of Chuck Blazer.

“In a way you cannot compare it completely to Marc Holder,” he says.

“It was a different issue.

“But here you have someone from the inside saying things are not correct.”

As it happens, Hodler’s whistle blowing did not amount to much as it concerned alleged attempts at bribery by Italians in his own Ski Federation of which he was President and for which he had no proof, just hearsay evidence.

What enabled the IOC to act, says Rogge, was by first of all admitting that there was an issue.

“We had enough hard evidence not to be in denial.

“We had evidence because we had the accounts of the Salt Lake City Bidding Committee and we had evidence that sums had been paid to various persons.”

The second thing is that, he insists: “Samaranch understood that it was not enough just to take care of the corruption, but he had the vision to see that we had to review the whole functioning of the IOC on a far broader sense.

“That has led to a number of issues like the setting up of the Athletes Commission.

“I gave a presentation to the International Federations and the National Olympic Committees within the IOC.

“It led to the Ethics Commission.

“It led to the Code of Conduct of the members, the rules of conflict of interest.

“It led to the new rules on candidate cities.

“We banned visits to the bidding city itself and considered a whole range of other issues.

“It led to the fact that candidate cities cannot play with incentives such as coaching camps or scholarships or building of infrastructure for the countries and the members.

“So all of that was something that Samaranch took a view on.

“We also decided to have total visibility on our finances, with publishing of the results, which we do every year.

“So, in a nutshell, Samaranch understood that we had to move from a sports club to an international organisation.”

Now, you may say Rogge will say all this because he is Samaranch’s anointed successor.

One of the things he said at his first press conference on taking office was how much he had learnt his sports politics from Samaranch.

But to dismiss this as just praise of pupil for a master would be wrong.

From the start, Samaranch understood that the IOC, facing mounting criticisms from Government, had to do something.

I well recall his press conference that Sunday evening, little more than 24 hours after Hodler’s bombshell.

I asked him if this was one of the blackest days in the history of the Movement and he said yes, but he was optimistic the sun would come out.

And the sun did come out.

Contrast this to Blatter’s first press conference after the Blazer revelations where he said, “crisis, what crisis?”

The IOC is also a different organisation to FIFA.

The IOC is made up of 115 self-elected members.

And the IOC, from its inception, has always tried its best not to behave like a collection of national representatives. 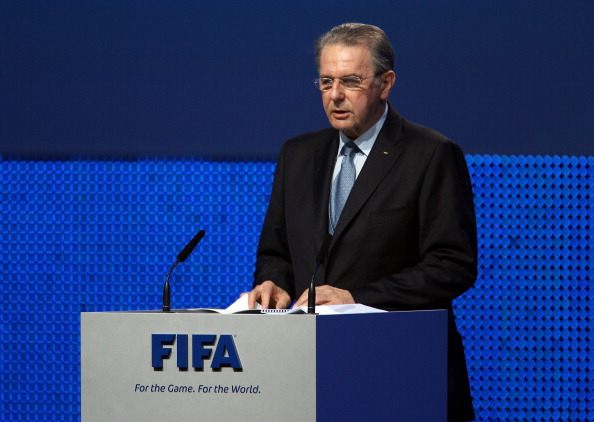 As Rogge (pictured), himself, admits, “The IOC’s structure on purpose, the whole theory of Pierre de Coubertin, was that you have an IOC member in your country, but not of your country.”

FIFA, in contrast, is like a United Nations General Assembly, an alliance of confederations of various nations.

They pride themselves as representing their nations and confederations at FIFA.

What is more, Confederations elect their own executive members and confederation Presidents behave like warlords.

In such a setup, a change of the type Samaranch brought about would be extremely difficult.

Observe how, in reaction to the Blazer whistle blowing, some Caribbean countries are seeing this is a conspiracy by the United States.

Blatter had provoked derision by asking Henry Kissinger to help.

But then, in the dark days of 1998, Samaranch also roped in Kissinger.

The real reason Samaranch was able to change things was that he had men on the inside who realised the IOC could not carry on as it had.

He had allies like the Canadian lawyer Dick Pound, Rogge and others who could immediately see what was wrong and what needed to be done.

Samaranch could not have done it on his own.

The question is where will Blatter find his Pound and Rogge?

Are there any in FIFA, I wonder?

There is no evidence that such people who can help Blatter exist in FIFA.

If they do, they have kept very quiet.

FIFA continues to behave as the IOC used to before the Hodler outburst – that it is all best kept in the family.

And until those family bonds are loosened, FIFA will not reform.

Mihir Bose is one of the world’s most astute observers on politics in sport and, particularly, football. He formerly wrote for The Sunday Times and The Daily Telegraph and until recently was the BBC’s head sports editor.