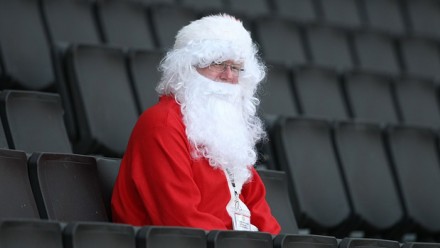 Is Lionel Messi fitter than other footballers, as well as being a better player? The four-time Ballon D’Or winner played 69 high level games in 2012 scoring a record 91 goals and didn’t appear to be tired for a single minute.

But those ‘unfortunate’ enough to earn their living playing in the English Premier League apparently suffered terribly over the Christmas and New Year period.

That’s according to the managers in the English Premier League whose chorus on the need for a winter break was in danger of drowning out the Christmas carols. As is traditional. Such protestations within the EPL means they are not so much biting the hand that feeds them as taking off the whole arm.

It’s no longer England’s league of course – it belongs to the world, rightly or wrongly. The world now pays for it, with television rights now over eight billion dollars for the next contract. The Christmas and New Year period provided a feast of football for those who devour it. EPL clubs warmed up for the big January freeze by playing five games in a fortnight, culminating in FA Cup third round action.

There is nothing quite like a trip to a match on Boxing Day or New Year’s Day. The earlier the kick off the better. And I’m not just talking about top level football. ANY half-decent fixture. The chill in the air sharpens the senses, and the matches can take on a different feel and character. A local derby for instance, in front of a full house at noon at the ground where you grew up watching football can be like a spiritual experience. Festive football has been part of football in England for over a century. Fans love it. (Remember them? the people who actually prop football up).

Yes the fixtures come thick and fast, and yes players are now part athlete part footballer. Covering many more metres per games as the statisticians usually tell us/bore us. But the brutality of Christmas and New Year fixtures has eased considerably.

I recently watched a welcome old television repeat of a Tottenham/Queens Park Rangers fixture from the late 70s when the commentator – the late, majestic Brian Moore – casually mentioned how Rangers may tire more because they had played on a terrible pitch the day before

That’s a terrible pitch the day BEFORE! Imagine Arsene or Alex accepting two days in two games now. Or a bad pitch.

Twenty years ago the Crystal Palace manager Alan Smith, always polite, told me he’d say a few words to me after a Boxing Day (December 26) game but it would have to be literally beside the coach. He needed to leave immediately as they had a long journey for a game the next day. They were in the top six! How fair was this? But I don’t recall him complaining, not anyone around him actually.

For nearly a decade the dream of those managing Premier League clubs has been the winter break. Envious glances cast around the continent, and the eternal suspicion that Germany’s incredibly good record at major championships has got something to do with having a few weeks off mid-season.

The Bundesliga resumed on January 18. Serie A on the 6th. La Liga as early as January 4.  So how much of a difference does it really make to play a winter break.

But if their over-cautious approach returns I may seek my own late winter break…from watching.

Lee Wellings is the Sports Correspondent for Al Jazeera English based in London. Al Jazeera broadcasts into 300 million homes across the globe, in 130 countries and millions more online at www.aljazeera.com