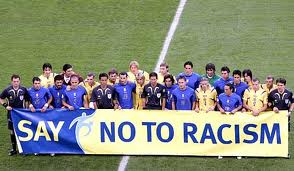 It has been a move so sharp, opportunistic and clinical any of the great strikers would have been proud of it.

Sepp Blatter moving into the space ahead of UEFA and putting himself and FIFA at the forefront of the fight against racism.

A set of apparently tough proposals from FIFA’s Strategic Committee are to be put in front of the Executive Committee late in March, and conceivably ratified by FIFA Congress in May.

Points deductions, exclusion from competitions, and even FIFA’s own r-word – Relegation – are all being considered by Blatter, who would be executing a 180 degree turn in public perception if they believe he is a crusader against racism.

Personally? I believe he means it, this is not just politics from the great enduring politician.

Ironic isn’t it? As the Al Jazeera interviewer who pressed him in 2011 on Terry and Suarez and was told they need to shake hands, I believe him. I don’t think for a moment Blatter is a racist for his clumsy words on that day in his office. And clumsy sentiment. His use of English, though far better than my Swiss German, didn’t help either.

But after that spectacular and almost unforgivable own goal. Blatter and his advisers have a chance of getting it right this time. They have caught UEFA napping.

UEFA is not a racist institution and yet it has left itself open to severe criticism. Here’s there official stance on the http://www.uefa.com/uefa/socialresponsibility/antiracism/index.html

But how can UEFA have threatened the Serbian government with expulsion from team competitions then failed to expel them for the disgraceful events in Krusevac last year? The small matter of sustained racist abuse followed by violence – players being attacked as they left the field.

Why are fines still being dished out to repeat offenders Lazio and Inter Milan, and stadium closures the biggest punishment, when it’s points deductions that would treat the matter with the gravity it deserves? Imagine if a club was kicked out of a cup competition for the behaviour of their fans. Would the fans do it again? Not even racists are that stupid.

Then there is the big stick that UEFA gave its critics to beat it with during Euro 2012. THOSE pants. Niclas Bentner fined €80,000 for breaking sponsorship rules with an advertising message on the band of his underwear.

It was spectacularly lacking in class. But a fine over five times as much as some national bodies get for failing to control racist fans? The message, however unfairly, came out that racism was bad, but wearing the wrong pants….that was a really serious indiscretion.

I do have a certain sympathy for Michel Platini having to challenge the verdict of the UEFA committee who made the absurd Serbia ruling – a game behind closed doors and a fine, partly due to a blatant attempt by the Serbian FA to make it look like they had cleaned it up internally.

The English FA don’t get everything right, heavens above there have been times they’ve failed to get anything right in my two decades covering them. But their 93-point racism document is full of integrity. And they did this with the ‘support of the British government’, who in March 2012 called an emergency meeting on racism in football in order to look like a government calling an emergency meeting on racism in football.

There were more token gestures at that meeting than in a Las Vegas slot machine arcade. More than 30 contributors, yet the meeting lasted an hour. Farcical, then the Government told the FA to go off and do something about it. They have, and fair play to them. Black English players have been racially abused at least half a dozen times across the continent in the last decade.

So the message to FIFA is don’t just talk about it. DO it. Get tough.

For the sake of Kevin Prince Boeteng, who felt his only option was to talk off the pitch playing for Milan against a small neighbouring club because of the racial abuse he was getting.

For Jose Altidore, who persuaded his team mates to stay on after vile and sustained abuse in Holland.

For Paul Canoville. if you don’t know who he is please read his book. As a young black footballer for Chelsea in the 1980s in a team and a stadium full of white men, the abuse he received is jaw dropping.

For John Barnes, the man making most sense about racism because he realized it isn’t as bad as when he was playing (so let’s not claim it is) but that this is STILL not good enough.

And for all those who continue to be abused for their skin colour, make it happen. Where’s the resistance going to come from?

Perhaps it will present legal challenges…since when have football and the laws that govern countries needed to align? Take another look at the conflicting John Terry verdicts from a court of the law and the English FA.

But right now the words we are getting from the very top are ‘zero tolerance.’ As opposed to what? ‘A little bit’ of tolerance of racism?

If this opportunity for harder measures isn’t seized then ‘zero tolerance’ will continue to achieve precisely zero in eliminating racism from football.

Lee Wellings is the Sports Correspondent for Al Jazeera English based in London. Al Jazeera broadcasts into 300 million homes across the globe, in 130 countries and millions more online at www.aljazeera.com. blogs.aljazeera.com/profile/lee-wellings. Twitter: LeeW_Sport