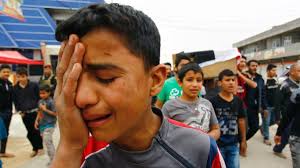 March 29 – Asian football has reacted with shock and anger at the deaths of at least 41 people, many of them children, caused by a suicide bomber who blew himself up just as trophies were being presented after a local tournament.

Amid growing global concern that football, so often a powerful unifying force, is now being targeted by terrorist groups, Asian Football president Shaikh Salman expressed his “deep sorrow” at last Friday’s tragedy outside the city of Iskanderiyah.

“Football is a powerful force for good and our game has a long history of bringing people together even during conflicts around the world,” said a statement.

“Using football and sport stadiums as a stage for these heinous acts of violence is a cowardly, completely unjust and indiscriminate act.”

Around 17 of those killed were reported to be aged between 10 and 16. More than 100 others were wounded in the attack near the village of al Asriya, 25 miles south of Baghdad

Islamic State said it carried out the attack, which it claimed was targeting Shia militiamen.

FIFA president Gianni Infantino also sent a message of condolence. “It is a very sad day, when people, going to a match together, become the victims of such violence,” he said.