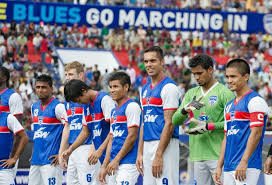 April 18 – Bengaluru FC have been crowned Indian champions for the second time in three years after defeating Salgaocar 2-0, but the future of the I-League remains in doubt.

While Bengaluru are celebrating their success, the I-League ponders its future. Only founded in 2007, the league has failed to generate much traction with fans, mainly due to poor marketing.

In contrast, the Indian Super League (ISL) is becoming India’s prime football league. The ISL works based on a franchise model, copied from the Indian Premier League in cricket. After just two seasons, the ISL has enjoyed considerable success with fans and media.

The All India Football Federation (AIFF) has repeatedly stated that that the I-League and ISL may merge in the future for India to benefit from a stronger singular league, but so far the AIFF hasn’t tabled any specific proposals, but has largely restricted itself to peripheral talks with stakeholders.

The I-League itself would back a single football league in two or three seasons with 14 to 16 teams nationwide with both franchises and clubs from the two different leagues.

Meanwhile Bengaluru continue their progress on the field. In the 2013/14 season the Bangalore club won their maiden league title and last season they finished runners-up behind Mohun Bagan from Kolkata.

On Sunday goals from Eugenson Lyngdoh and Seminlen Doungel, either side of the half, ensured the Ashley Westwood-coached side of their second I-league title with a comfortable win over Salgaocar.

With 32 points from 15 matches Bengaluru enjoy an unassailable five-point lead over Bagan with one match day remaining.