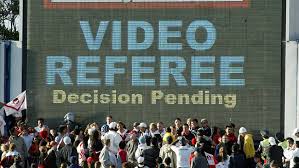 The International Football Association Board, the game’s lawmakers,  last month approved experimental trials over a two-year period and Infantino hopes that will bear fruit.

Describing the technology as “something that everyone was waiting for,” he said it could be used on the sport’s biggest stage almost as soon as experiments come to an end. “This test period will start now, will take two years. This will mean that by March 2018 we will see if it works or not,” Infantino said.

Tests initially will be in private before moving to a live pilot phase. Implementation will be restricted to controversial goals, disputed penalties, sendings-off and cases of mistaken identity. “We will know in time and I hope that Russia 2018 will be the first World Cup where the referees will be a helped a little bit by video technology,” Infantino told a news conference.

“We have to address all the issues and I think that these events give the opportunity to speak about topics which maybe are not pleasant, which maybe sometimes are not directly linked,” he said.

Russian Sports Minister and World Cup organiser Vitaly Mutko, who was sitting beside Infantino, defended the gay propaganda law, saying that “no one has been persecuted, no one is persecuted.”

Infantino began his tour Tuesday with a visit to Moscow’s Luzhniki Stadium, which is undergoing a major rebuild to be ready for the World Cup final. He said he had received assurances from the Russian government that the country’s economic crisis would not affect preparations.

The World Cup budget has already been slashed and Infantino said: “Everyone knows, of course, the economic situation and we have received sufficient guarantees that this will not have an impact. I think actually quite the opposite, I think that the World Cup can contribute to boost not only the football movement but the general economy here in Russia.”

Infantino, inevitably, was asked about his  involvement in the Panama Papers revelations and the deal he signed off when he was at UEFA with owners of an obscure offshore company who have since been caught up in the widespread US-led football corruption probe. Once again, he dismissed an issue that has become an unwanted distraction in his first few weeks as Fifa president, insisting it had not hurt his reputation.

“I don’t think at all this will have any impact on what I’m doing,” he said. “I simply want to be judged by the facts and by the actions of my work.”

After visiting Russia, Infantino is making his first trip as FIFA president to 2022 World Cup hosts Qatar amid another salvo from Amnesty International about the Gulf state’s human rights record.

Last week, with the treatment of migrant workers in Qatar under continuing scrutiny, an independent report from Harvard professor John Ruggie commissioned by FIFA four months ago said the organisation must in future make human rights a priority when awarding countries the World Cup.

“Without robust engagement starting right now, every football fan who visits Qatar in 2022 is likely to directly encounter migrant workers – in hotels, sports venues, shops – whose human rights have been abused.

“It is essential that FIFA publicly calls on Qatar to tackle the systematic exploitation and abuse of World Cup workers, largely driven by the sponsorship system in Qatari law that leaves workers at the mercy of their employers.

“Amnesty International has spoken to more than 200 workers and every single one of them reported abuse of one kind or another, and that was at just one stadium and its surrounding facilities. What happens when work on seven brand new stadiums peaks in 2017?”