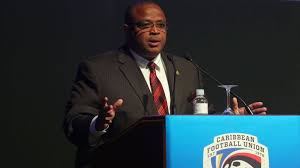 April 21 – Gordon Derrick, the Caribbean Football Union (CFU) president who was banned from running for the presidency of CONCACAF after FIFA’s Independent Audit and Compliance chief Domenico Scala ruled he had failed the integrity test, did in fact clear all the CONCACAF integrity hurdles before the file was passed to FIFA.

The FIFA Audit and Compliance Committee ruling raises major questions about the ethics body’s independence and whether it is being manipulated by a political agenda. There are also questions as to whether FIFA Ethics has acted beyond its powers and broken its own codes.

Insideworldfootball has seen correspondence from Sidley Austin lawyer Samir Gandhi (acting for CONCACAF) to Scala saying that they saw nothing in the file that warranted banning Derrick from the election race.

But ban Derrick is exactly what Scala did, just a few days later, citing a reprimand Derrick had received from FIFA in 2011 and an on-going investigation. That investigation is believed to be related to FIFA GOAL funding in Antigua that had not reached any conclusion more than a year after the investigation began.

In his April 6 email to Scala, Gandhi says that there is “nothing that would rise to the level of making a recommendation to reject.  As such, we believe that he has passed the eligibility check notwithstanding numerous outstanding negative issues.”

Presumably the “negative issues” Gandhi is referring to are the 2011 reprimand and press articles from 2013 (stories broken by Insideworldfootball) where Derrick instructed CFU member associations to vote for US Soccer president Sunil Gulati to be CONCACAF’s representative on the FIFA executive committee. Gulati was elected by one vote with significant support from then CONCACAF president (now under house arrest in the US) Jeffrey Webb.

Sidley Austin had no access to FIFA Ethics information but it did have direct access to Gulati who the law firm works with on an almost daily basis in the running of the confederation, and especially its reform measures. Gulati would have been able to give first hand information regarding Derrick and the support Antigua has received from the US Soccer Federation in the past.

CONCACAF’s executive committee have all been vocal supporters of Canadian FA president Victor Montagliani in the election race, while the full time executive has been accused by former candidate Mark Rodrigues of manipulating the opportunities to lobby federations in Montagliani’s favour.

The removal of clear favourite Derrick from the election could be construed as political dirty tricks, but by whom? The correspondence seen by Insideworldfootball makes it clear that CONCACAF had found no reason to ban Derrick, but Scala thought otherwise.

This raises a major issue in the boundaries FIFA Ethics is crossing and whether it is acting unethically. FIFA has made great capital out of claiming it can’t be responsible for its confederations – that they are not even a member of FIFA but are constituted outside of the global governing body. But in this case FIFA is stepping into a confederation and banning an individual from running for election to a post that FIFA has no power over.

That FIFA Ethics has so far got away with this is remarkable in that no-one has challenged the decision – not least CONCACAF despite this being a clear challenge to their ‘sovereignty’ (assuming of course that they are not complicit).

Even if the FIFA Ethics ban on Derrick running for office was somehow found to be legal, the reasons for the ban seem weak. Derrick was reprimanded in 2011 and fined SFr300 for not fully co-operating with the investigation into the cash-for-votes scandal in Trinidad when Mohamed Bin Hammam, via Jack Warner, handed out $40,000 to each member association. However, Derrick was found to have never taken the money but was reprimanded for not co-operating fully with the investigation – an offence deemed so small it can’t be appealed against under FIFA law.

As regards the on-going investigation, FIFA has not revealed what information it has or why it merits what looks like a clumsy and unconstitutional intervention into CONCACAF’s business.

To quote Hamlet: “Something is rotten in the state of Denmark”. The question of whether the FIFA ethics process has become a convenient tool of a politically driven process – the dominance of the US and US advisors in FIFA thinking has been raised on a number of occasions recently – is reminiscent of another quote from Hamlet of the “revolting odors that accompany the process”.