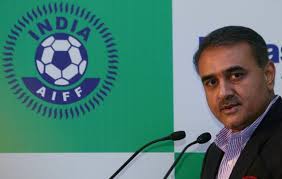 April 21 – Speaking at a press conference to announce cooperation between the All-India Football Federation (AIFF) and France’s FC Metz academy over youth training, AIFF President Praful Patel (pictured) argued the blanket ban on sporting activities in Maharashta was unfair on football and revealed that the Indian Premier League (IPL) and I-League are to be merged in the near future.

In response to a question from reporters about a possible merger of India’s two leagues, Patel said: “We are into framing a new structure (to make the two leagues as one) and all these will be given a proper direction.”

Asked if I-League and the successful Indian Super League will be merged in the near future, Patel said: “We are into framing a new structure (to make the two leagues as one) and all these will be given a proper direction.” However, Patel gave no detail on how this would be achieved, saying, “We are working on this, but how and when it will be done is yet to be decided. There are several things to discuss before doing this, we have held only initial discussions.”

The Hero Indian Super League was set up as a parallel league to the I-League by IMG in association with the AIFF in an attempt to kick-start soccer in India and recreate the success of Indian Premier League cricket. FIFA allowed the experiment to go forward despite it being against the FIFA statute banning rival leagues operating in the same country.

Asked about the recent Bombay court ruling banning sporting activities in order to save water in drought-hit Maharashta, Patel said: “I will tell you, to the misfortune, most of the stadia in this country are of cricket and in Maharashtra we have very few football stadia. These football stadia used very little water and the one in Mumbai is a synthetic turf and we need very little water,” he said.

“But let me be honest, sport in general, cricket or otherwise, we should not completely clamp down on these activities. I appreciate there is a water scarcity and it was said that non potable water was to be used and in limited quantity. Blanket ban was not right but at the same time, what the court has mentioned in terms of IPL is that IPL is not an event like a World Cup. IPL is more a tournament. In that case what the court has said it should be accepted.”

Reporters also asked the Nationalist Congress Party leader his views on the return of the Kohinoor diamond, to which he responded, “This issue of Kohinoor from what I read from the media is much ado about nothing. I don’t know why it has been racked up. Let the Kohinoor be wherever it is. And let India shine like a Kohinoor, that is more important.”

As far as the stated topic of the press conference, held at the French embassy, was concerned, Patel said that Anirudh Thapa of Dehradun, Jerry of Mizoram and Prasanjit Chakraborty of West Bengal would train at the FC Metz Academy in France initially for three months and the AIFF would bear all the expenses.

“This is a beginning,” he claimed. “And we will expand this kind of initiative in future. Even the players who will be part of the Indian team for next year’s FIFA U-17 World Cup will be sent to different academies of the world once the event is over in October 2017.

“We will have a review after three months (whether these three youngsters will continue at FC Metz) but I am sure they will continue. The review would be just a formality I think.”