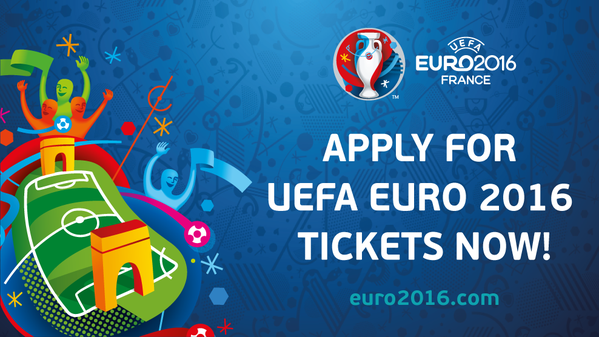 April 22 – With less than 50 days to go until kick-off at EURO 2016, UEFA has announced that there will be a final round of ticket sales for this summer’s European Championship in France.

Next Thursday April 26 Europe’s governing body will release a final batch of tickets for the highly anticipated tournament. The ticket portal will serve fans on a first come, first served basis.

UEFA said that the new publicly available tickets have come from a variety of sources:  stadia layouts have been finalised releasing more tickets and a number of participating member associations have not taken up their entire allocation of tickets.

The vast majority of tickets for the championships have already been snapped up by fans, and UEFA expects these remaining tickets to sell out quickly. Ticket prices range from €25 in category four during the group stages to €895 in category one for the final.

France is bracing to receive some 2.5 million fans, who will watch 51 matches at the ten different venues. English, Irish, Belgian, German and Swiss fans are expected to travel in large numbers.

EURO 2016 begins on June 10 when hosts France welcome Romania at the Stade de France in Paris. The same venue will host the final exactly one month later.

The 2016 European Championship is the first time 24 countries will participate in the expanded finals format. Smaller nations such as Wales, Iceland, Hungary and Northern Ireland have all benefited from UEFA’s expansion policy.

Spain are the defending champions after defeating Italy in the final of EURO 2012.