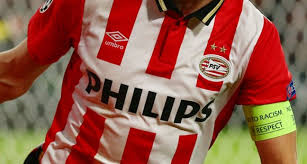 April 25 – One of the longest running shirt sponsorships in European football comes to an end this summer when for the first time in 33 years Philips won’t be the brand on PSV Eindhoven’s shirt. Philips’ sponsorship will be replaced by Energiedirect in a three-year deal worth €18 million.

Energiedirect is part of the energy conglomerate Essent, who also sponsor Dutch top flight club Groningen. The Energiedirect brand name will be on PSV’s iconic red and white striped shirt.

PSV have been searching for 12 months for a replacement for Philips as shirt sponsor. In 1913 Philips SV was founded as a team for Philips employees in Eindhoven, explaining the presence of Philips name in the team name. The sponsorship deal between PSV and Philips was worth between €5 million and €7 million per year.

Philips explained that the decision to step back as main sponsor of PSV was not for financial reasons, but because it fits with the organisational changes Philips is undergoing away from consumer electronics and more towards medical equipment.

The new three year deal with Energiedirect will be worth €6 million per annum, with possible bonuses worth up to €1 million.

At the weekend PSV defeated Vitesse Arnhem 2-0. With just two match days remaining in the Dutch topflight Eredvisie, PSV and Ajax Amsterdam are head-to-head in the battle for the domestic championship. Both clubs are on 78 points, but Ajax boast a better goal difference.

PSV host Cambuur on May 1 before traveling to Zwolle the weekend after.