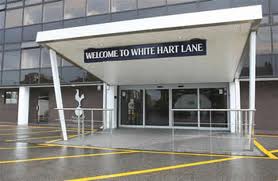 April 25 – Tottenham Hotspur are reportedly in discussion about moving some of their home games next season to Wembley as capacity at White Hart Lane may be reduced by more than initially expected and at an earlier stage under the rebuild plans.

Spurs are at the start of a £400 million reconstruction of their North London stadium that will see capacity increase from 36,284 to 61,000. With the club almost certain to be playing in the Champions League next year, the option of using the larger capacity Wembley (earlier than had initially been anticipated) would ease the demand on tickets.

Completion date for the new stadium is set for the start of the 2018/19 season and Spurs were already in discussion with Wembley about a switch to the national stadium for the 2017/18 season as the rebuild.

With building plans now proposing that a further 8,000 seats be removed from the current capacity next season, the club are said to be looking at Wembley options being brought forward, in particular for home Champions League matches. Spurs have sold out their stadium all season, operating at over 99% capacity.

Wembley has a restriction on events using the full 90,000 stadium capacity to 37 a year. But there is no restriction on events under 50,000. The FA has already said that it would work with both Spurs and Chelsea (who are also in the early planning stage of a ground rebuild) in terms of facilitating their home fixtures.

Spurs chairman, Daniel Levy, has previously said: “In respect of driving higher revenues in order to enable greater investment in players, it is clearly evident that we need a ‘gamechanger’ to lift this club to the next level – namely an increased capacity stadium.

“Currently we are competing for Champions League qualification whilst driving revenue in the smallest stadium of the top six clubs in the Premier League. The new stadium is, therefore, critical.”

On the other side of London West Ham have been gifted that ‘game changer’ with their move to the re-configured Olympic Stadium next season. Initially Spurs were in the bidding to take occupancy of that venue but pulled out in favour of rebuilding their own home and regenerating the area around White Hart Lane.