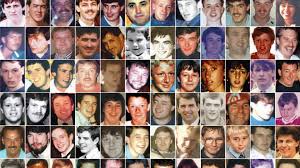 April 27 – The damning unlawful killing verdict in Britain’s worst ever sporting tragedy may have brought justice after 27 years but attention now switches to whether criminal prosecutions will follow.

For the first time since 96 Liverpool fans died at the Hillsborough stadium disaster in Sheffield in April 1989, their families may see public prosecutions against individuals and organisations.

The indications are that charges are now likely, whether for manslaughter, negligence or perverting the course of justice. The match commander, Chief Superintendent David Duckenfield, was found “responsible for manslaughter by gross negligence” due to a breach of his duty of care to the fans.

That verdict does not come with a criminal penalty. Any prosecutions which result from the inquests or investigations will be the responsibility of the Crown Prosecution Service which stated, after the truth was finally revealed, that it will now “formally” consider criminal investigations.

Relatives of those who died as a result of the fatal crush accused the South Yorkshire Police force of “a culture of denial”.

Stephen Wright, whose brother Graham, 17, died in the tragedy, said: “The evidence over the past two years has been overwhelming, yet South Yorkshire Police and their senior officers have tried to look truth in the eye and deny responsibility and shift blame on to others.”

Hillsborough campaigner Trevor Hicks, whose lost two daughters, said he had spent “an awful long time” wondering “what purpose in life I had”.

“It robs you of everything,” he said.

“All families and survivors now have official confirmation of what they always knew was the case – that the Liverpool fans were utterly blameless in the disaster that unfolded at Hillsborough,” he said.