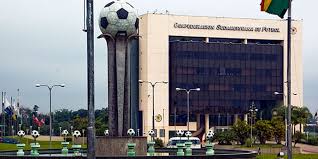 May 6 – Money laundering prosecutors in Paraguay have handed over 10,000 documents seized from CONMEBOL’s headquarters in Asuncion to US prosecutors investigating corruption within football.

Hernán Galeano, a lawyer in the Paraguyuan Attorney General’s Office, said the 10,000 documents included 7,000 which represented authenticated evidence. The papers include invoices, minutes of meetings, money receipts, extracts from papers on transfers, contracts, evidence of deposits, copies of money orders, cards, payments of commissions, lists of banks, bank accounts and personal accounts, among others.

Galeano was filmed with officials delivering the boxes of documents, saying: “It is a demonstration that cooperation requirements were met with the care of the chain of custody and preservation of evidence.”

The documents had been seized during a RAID last January on the headquarters of CONMEBOL, at a request of the Prosecutor General of United States and as part of the judicial process carried out in New York against a number of former officials of the continental sporting organization.

According to Galeano, an alumni of the Inter-American Defense College, the search of CONMEBOL, seizure of documents and their transfer to US prosecutors was made in adherence to the Inter-American Convention on Mutual Assistance in Criminal Matters signed in Nassau, Bahamas, in 1992, between the Republic of Paraguay and the United States.

The hand-over fulfils an earlier promise by Galeano to share and release evidence gathered which, ”reflects our belief that the entire continent is unanimous in condemnation of these practices that have damaged the image of football.”