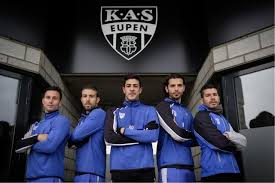 May 10 – Qatar’s Belgian investment at Eupen has come good with the club’s ascendency to Belgium’s top flight, but only after a farcical kerfuffle of Belgian bureaucracy.

In 2012 Qatar’s Aspire Zone Foundation (AZF) bought KAS Eupen, a provincial second division club squeezed between Liège and the Ruhr area. Eupen were in financial difficulties and AZF offered the club a lifeline.

The acquisition was made as part of Aspire Zone’s ‘Football Dreams’ programme, which scouts potential talent among adolescents in developing African nations as well as Vietnam, Thailand, Guatemala and Paraguay. Eupen would function as a side door into European club football for the Aspire players.

Ever since the takeover Eupen has been closing in on promotion to Belgium’s topflight, the Pro League, but too often falling short at the last hurdle. This season Eupen finished third behind White Star Brussels and Antwerp in Belgium’s second tier, the Proximus League, but the local Court of Arbitration for Sport (BAS) ruled that WS Brussels, who were supposed to be promoted, didn’t have the required financial underpinning or infrastructure to do so.

WS Brussels failed the licensing criteria because the club doesn’t have a large enough stadium to play in and has built a six-figure debt. Chairman John Bico has stated that WS Brussels won’t take the matter to the civil court. WS Brussels had topped the division after the Belgian FA, the KBVB, had awarded the club an additional two points over a disputed match with Seraing.

But with the Brussels club ruled out of promotion, Eupen have stepped up and will join Belgium’s top clubs Anderlecht, Standard and Club Brugge in the 2016/17 topflight as the second tier is trimmed to just eight clubs as part of a reorganisation of Belgium’s professional game.