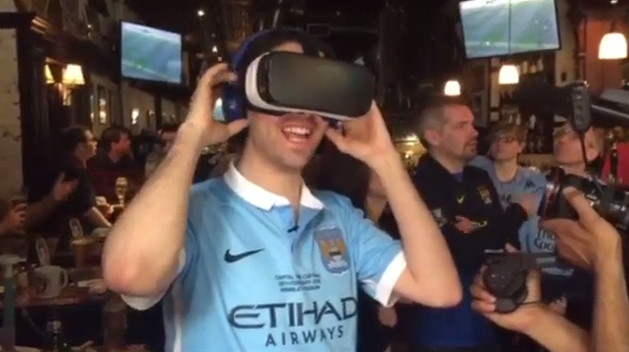 May 11 – Manchester City has taken a deep media step into the opportunities of Virtual Reality with a test of last weekend’s game against Arsenal that was broadcast to a select group of fans in London, New York and Melbourne.

For the broadcast Man City teamed up with Sky Sports and LiveLike. It is the first Premier League match to trial VR technology.

LiveLike combines an end-to-end streaming platform with it user interface to provide an immersive experience regardless of location.

Miheer Walavalkar, Chief Business Officer of LiveLike, said: “LiveLike is focused on creating an atmosphere that allows fans to feel like they are in heart of the action while having everything they would possibly want around them. Today, this manifests itself in the form of a highly interactive environment with in-depth statistics, highlights and archived footage.

“In the future, fans can enjoy the game day action with family and friends regardless of distance and location. Partnering with Manchester City FC has given us the opportunity to showcase the powerful immersive experience virtual reality brings. Together we will continue to push the boundaries of enhancing fan engagement.”

VR broadcast rights are a new area and look most likely to open up a new category of broadcast rights sales for rights holders. At the moment these are early days for the technology and its consumer acceptance, hence it seems unlikely to cannibalise any more traditional broadcast rights windows, but potentially looks more like a premium subscription offering. But with the Manchester City’s increasingly global fanbase, that could become a significant revenue line.

Man City has experimented with various video and broadcast technology including using iON point-of-view cameras on first team players during training, placing a 360⁰ camera on the roof of the players’ tunnel on matchdays, and launching a Google Cardboard-enabled CityVR app, which was the club’s first foray into the world of virtual reality.

Sky Sports has already taken steps to ensure it doesn’t miss out on any potential explosion of VR technology and through its Sky VR Studio has been exploring opportunities across all genres of content.

Steve Smith, director of Sky Sports production, said: “At Sky Sports, we’ve always been at the forefront of innovation, looking for new ways to deliver the best possible viewing experience. We are the first broadcaster to test live VR for Premier League football. Working in partnership with Manchester City and LiveLike has allowed us to push the boundaries once again.  It is the next step in our VR story and the results are really impressive.”

Diego Gigliani, Senior Vice President of Media and Innovation at City Football Group, said: “At Manchester City, we’re constantly exploring new ways to connect with our fans. In doing so, we proactively look for and embrace innovative technologies that can help complement our physical touch points and strengthen our relationship with our fans. Virtual Reality is one of them.

“We began looking at how we could use VR to enhance the fan experience over a year ago… There’s still a lot to be done until the technology matures and we find the right content offering, but the fans’ reactions to this test prove how incredibly engaging and transformational virtual reality can be.”