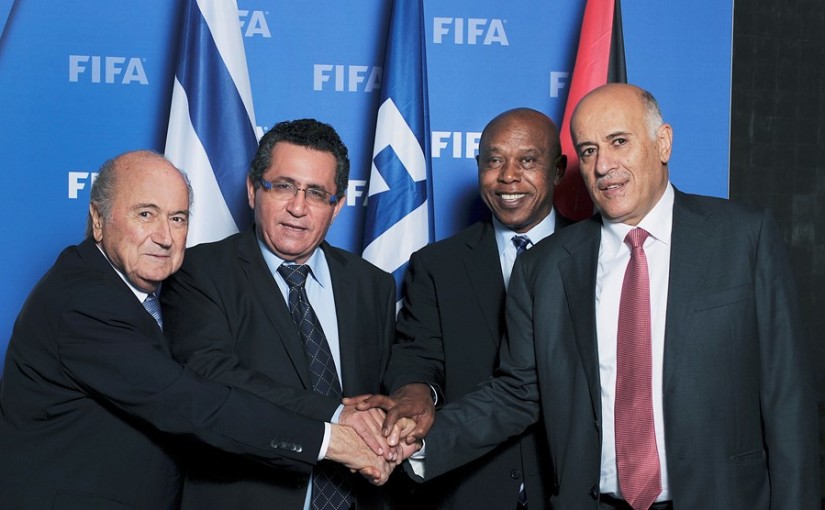 May 10 – A group of anti-Israeli activists is urging FIFA not to just bury the plight of Palestinian footballers in the occupied territories when it holds its annual congress in Mexico on Friday.

Red Card Israeli Racism is endeavouring to maintain the narrative in terms of finding a solution and wants to make sure new FIFA president Gianni Infantino does not allow the issue to conveniently disappear.

At last year’s congress in Zurich, Palestine withdrew its proposal to throw Israel out of FIFA at the eleventh hour but not before its fiery leader Jibril Rajoub (pictured far right) issued a typically emotional and impassioned indictment of the current situation in Gaza and the West Bank regarding the free movement of Palestinian players and equipment.

In extraordinary scenes rarely witnessed in the conservative corridors of FIFA, a full soap opera was played out before the respective federations of Palestine and Israel somehow clinched a deal to set up a more robust monitoring committee that saved face all round.

Red Card Israeli Racism claims Israel has since done little to improve the situation, however.

“A year ago IFA President Ofer Eini (pictured second left) shook the hand of his PFA counterpart Jibril Rajoub, and the IFA agreed to work constructively to resolve the obstacles besetting Palestinian football,” said the protest group’s spokesman Geoffrey Lee. “But its actions since then read like a catalogue of bad faith.

“The IFA has complied with the formal negotiation process set up by FIFA but it has said one thing and done another.”

Lee concedes FIFA’s Israel/Palestine Monitoring Committee has met three times over the past year and has agreed new steps to aid the free movement of Palestinian footballers including the establishment of a permanent support unit to oversee the matter.

But he claims that in practice footballers and officials still face repeated obstruction from Israeli officialdom and draws particular attention to the case of Fadi Al-Sharif of Al-Hilal Gaza FC.

“Fadi was arrested on 3rd March after he went to hospital to get a knee injury treated. He had permission to travel, but was detained anyway. Is Israel denying players the right to seek medical treatment? Cases like this just keep happening.”

Lee also claims that since the Monitoring Committee was formed Israel has:

Whether any of these claims are true or have a pro-Palestinian spin cannot be independently verified.

But Lee insists:  “It’s the same old story.  Israel uses talks as a smoke-screen while it continues its abuses uninterrupted. It’s high time the state, and its FA, were held to account.”