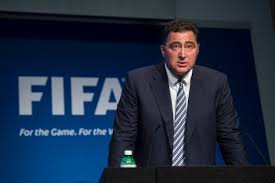 May 14 – Domenico Scala, head of FIFA’s audit and compliance committee and one of the organisation’s most important independent watchdogs, dramatically resigned today after his position was rendered untenable by Gianni Infantino, prompting the first major crisis of Infantino’s three-month-old presidency.

After intense discussions, Scala, arguably the prime mover in FIFA’s reform process with a key responsibility for monitoring FIFA’s checks and balances, resigned in protest at a contentious new rule, shoehorned into Friday’s FIFA Congress at the 11th hour without warning and which seriously undermined Infantino’s claim that he was leading FIFA into a new era of credibility and transparency.

The proposal, approved by Congress delegates who hardly had time to digest it before voting, gives FIFA’s new-look Council carte blanche to sack members of the very independent bodies  who have sought to clean up FIFA over the past few months.

Those in the firing line could theoretically include ethics judge Hans-Joachim Eckert and investigative chief Cornel Borbely who have brought down a string of corrupt figures. But it was too late for Scala who issued a resignation statement as he flew of Mexico after a week that was intended to enhance Infantino’s image as the voice of democracy and integrity but ended with his power base cemented and his suitability for the job very much under scrutiny.

In his resignation statement, Scala, who drafted the original set of reform measures had also responsibility for overseeing strict integrity checks, said he others had been  “factually deprived of their independence and are in danger of becoming auxiliary agents of those whom they should actually supervise.”

Declaring that the contentious regulation change was “virtually smuggled through with no explanation and no debate,” he added: “This undermines a central pillar of the good governance of FIFA and destroys a substantial achievement of the reforms.  For this reason, I herewith declare my immediate resignation as President of the Audit and Compliance Committee of FIFA.”

Insideworldfootball understands that the proposal had not been seen by member associations prior to its display on the big screen in the Congress auditorium, but was deliberately directed at Scala, who walked out of the Congress hall shortly after delivering his own report on the work of the audit and compliance committee.

Sources close to the 37-strong Council, yet to be finalised and which at this stage comprises exactly the same membership as the executive committee it is supposed to replace, said Infantino and Scala had fallen out on a number of issues, one of which was Infantino’s seemingly unilateral choice of Fatma Samba Diouf Samoura as his new number two without going through a multi-candidate comprehensive selection process.

Another was apparently Infantino’s refusal to accept a reported salary of $2 million offered by Scala’s compensation committee. Sources with knowledge of the salary issue say Infantino’s contract remains unsigned since he is refusing to take less than his predecessor Sepp Blatter.

Infantino is further understood to have at one point considered dismissing Scala in front of the entire FIFA membership but instead chose to draw up the already infamous proposal after what one insider described as a classic night of the long knives.

In his angry resignation statement, Scala, who will be a hard act to follow, questioned whether FIFA would be able to move on under the leadership of Infantino who was regarded as a safe pair of hands when he took over from Blatter in February.

“Whether the adopted reform points will now really be filled with flesh and blood, remains open for the time being,” said the Swiss-Italian. “My resignation shall also be a wake-up call.”

In a statement FIFA said it accepted Scala’s resignation “with immediate effect” but that he had “misinterpreted the purpose of the decision taken.”

With this decision, it will henceforth be possible for the Council to impede investigations against single members at any time, by dismissing the responsible Committee members or by keeping them acquiescent through the threat of a dismissal.

Thereby, those bodies are factually deprived of their independence and are in danger of becoming auxiliary agents of those whom they should actually supervise.

I am consternated about this decision, because it undermines a central pillar of the good governance of FIFA and it destroys a substantial achievement of the reforms. For this reason, I herewith declare my immediate resignation as President of the Audit and Compliance Committee of FIFA.

Since the announcement of the resignation of the former President last June, I had pushed on various levels and vigorously for the elaboration and adoption of a comprehensive reform package for FIFA. At the end of February of this year, the Congress finally approved a future-oriented package and thereby paved the way for FIFA to a more credible future.

This decision still fills me with satisfaction and also a certain pride. Whether the adopted reform points will now really be filled with flesh and blood, remains open for the time being.

My resignation shall also be a wake-up call and shall give backing to those persons involved, who genuinely advocated for implementing the reforms until today. I would like to prompt all of them: Keep going like this, FIFA needs and deserves your commitment and your consistent action.“

The contentious regulation change, which was virtually smuggled through with no explanation and no debate and approved by a sleep-walking 186-1 vote, stated:

The Council proposes that the Congress authorise the Council to appoint the office holders for the remaining vacant positions within the respective committees of the judicial bodies, the Audit & Compliance Committee and of the Governance Committee until the 67th FIFA Congress and to dismiss any office holder of these committees until the 67th FIFA Congress, which shall come into effect immediately.

The decision was made to permit the Council to appoint members on an interim basis to the vacant positions of the new committees so they can start fulfilling their roles as part of the ongoing reform process until the next FIFA Congress in 2017. In addition, the measure allows for the swift removal of members who have breached their obligations.

The Council fully respects the independence of the Audit and Compliance and the Ethics committees, and any suggestions to the contrary are without merit.  Mr. Scala has made unfounded claims which are baseless. FIFA is focused on reform and the path forward as evidenced by the appointment of a new FIFA Secretary General.

Pending the appointment of a new Chairman of the Audit & Compliance Committee, current Deputy Chairman Sindi Mabaso Koyana will serve as acting Chairman.

The appointments of all members of the FIFA Audit & Compliance Committee and FIFA’s judiciary bodies are subject to strict eligibility checks by the independent FIFA Review Committee. The Congress elects the members of the Review Committee. Former European Court of Justice Advocate General Miguel Poiares Maduro, former Indian High Court judge Mukul Mudgal and former Sporting Cristal President Felipe Cantuarias Salaverry will form the first independent Review Committee. This mechanism is designed to protect the organisation against any conflict of interest in the approval of any appointments to the key committees and bodies.