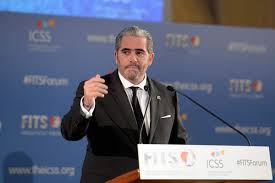 May 17 – The fledgling Sport Integrity Global Alliance (SIGA) has signed its second country and the first in North America to its membership.

Mexico – through the National Authority of Physical Education and Sport (CONADE) – joins Spain as a SIGA member, committing itself to the 12 Core Principles on Sport Integrity that were formally adopted last month in Madrid, in a meeting hosted by the Spanish Government.

SIGA’s core objective is to establish a global standards of best practices and encourage their implantation across sports and countries worldwide. The three core areas for SIGA are Financial Integrity, Good Governance, and Sports Betting Integrity.

Initiated principally by Qatar’s International Centre for Sport Security (ICSS), SIGA is broadening its stakeholder base away from the ICSS’s umbilical cord.

Emanuel Macedo de Medeiros (pictured), coordinator of SIGA, and CEO of ICSS Europe said:“As a newly-launched informal alliance with a common goal of driving key reforms in the sport industry, SIGA welcomes Mexico to our coordinated global effort to tackle corruption in sport.”

Mexico has been taking a more active role in international sport leadership recently, hosting the FIFA Congress last week in Mexico City – the first Congress of the ‘reforming’ FIFA. Liga MX’s chief executive Enrique Bonilla was elected to FIFA’s Audit and Compliance committee. Though the Congress and FIFA once again managed to shroud itself in controversy over the railroading through of new rules abandoning the independent status of key ethics committees by FIFA’s new president Gianni Infantino. A motion that forced the resignation of Audit and Complaince chief (and the key figure behind FIFA’s whole reform process) Domenico Scala.

It will be interesting to see if SIGA have the teeth to comment on this issue going forward.

Alfredo Castillo Cervantes, Head of CONADE:“Following our positive cooperation with the ICSS, Mexico is joining the multi-stakeholder coalition of SIGA to help accelerate the adoption of international standards and best practices that will lay the proper foundation for ensuring a strong future for sport.

“Governments must preserve the role of sport in society and there is no better way to do this than by working closely with the members of this coalition.”