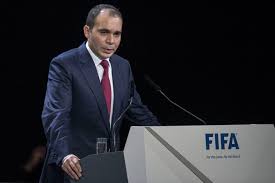 Prince Ali was in effect the kingmaker when Infantino won the presidency in the second round of voting last February by making sure his first-round support switched to the Swiss-Italian to get him over the line.

But Prince Ali, a former FIFA vice-president who has twice failed to secure the top job, says those who thought Infantino was the best person to succeed Sepp Blatter have now been duped by events in Mexico when FIFA’s new-look Council was unexpectedly given power over key independent bodies.

Prince Ali says the motion put to Congress to allow the Council to hire and fire judiciary officials came as a “complete surprise to all” and could cause “immeasurable” damage. It has already led to the resignation of audit and compliance committee chief Domenico Scala.

“The way the vote was put to the 209 members of the FIFA congress, as well as the effect of that vote, was a complete betrayal to all of those who thought they had voted for change, transparency, fair play and reform,” Prince Ali fumed.

“It is one of the biggest blows FIFA has received in the last two years; the ramifications of which are massive.

“The damage that can be done to FIFA if the situation remains as it is is immeasurable. A highly respected man in FIFA, Domenico Scala, has already resigned over this. The independence of the oversight bodies is essential to be able to co-operate with external law enforcement.”

Prince Ali echoed the thoughts of many when he said delegates had no time to digest what they were voting for.

“Had delegates to the FIFA congress been given time to absorb what had been asked, or truly consider this motion, I very much doubt that anyone would have voted for it.

“The fact was that members were not prepared, did not understand what had been asked of them or what it meant clearly. The motion was sprung on the Congress without prior consultation either by FIFA or the newly-named Council.”

Prince Ali, a staunch supporter of reform, told the Daily Telegraph: “Over the last two years, FIFA has somehow survived public scandal after public scandal. The sole reason it survived these trying times was because in its structure it had two independent ethics organs: the ethics committee’s adjudicatory chamber chaired by Hans-Joachim Eckert and the investigatory chamber chaired by Cornel Borbely.

“Both these chambers had the remit from our Congress and the members of FIFA, to act independently of the Council. In the last two years that shook FIFA, the brave decisions that came to save the world football body came from these two separate structures.

“We voted that power over football should no longer be held by any one person, not even by the newly-appointed council. We voted for an independent ethics oversight, a council and a non-executive president and above all a return of power to the member associations, because ultimately it is the FAs and the Congress who have responsibility for football.

“That the world body would continue to renege on its promises of good governance sets a poor (example) at best and (is) a total betrayal of the faith that our youth around the world have in the beautiful game.”