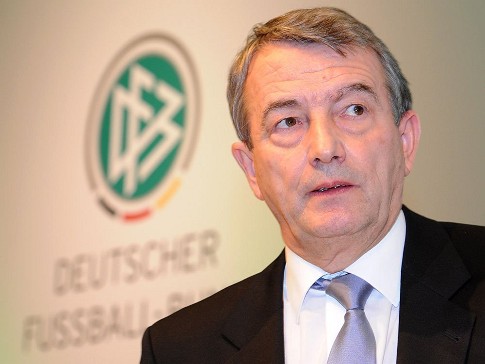 May 20 – The career of Wolfgang Niersbach (pictured), for so long the rising star of German football administration who was touted as a potential leader of UEFA, has suffered a potentially fatal blow with FIFA’s ethics committee recommending a two-year ban and a SFr30,000 fine be imposed on him following  an investigation of Germany’s 2006 World Cup bid.

Niersbach was one of six German officials probed in the wake of internal inquiry commissioned by the German FA and carried out by law firm Freshfields. He was specifically investigated by FIFA for “possible failure to report” unethical conduct by others and conflicts of interest.

Franz Beckenbauer, Germany’s most revered footballing icon, and three other World Cup officials are also under investigation for various irregularities over the 2006 bid process including “possible undue payments and contracts to gain an advantage in the 2006 World Cup host selection and the associated funding.”

Niersbach, who was vice-president of the 2006 organising committee, resigned as head of the German FA in November but somehow managed to retain his elected FIFA and UEFA executive committee posts which must surely now come under serious threat.

On Wednesday, he attended a UEFA executive committee meeting in Basel, Switzerland, to set a date for the presidential election to replace Michel Platini.

The entire affair was prompted by a €6.7 million payment alleged to have been a secret slush fund to buy votes but which German authorities insist was a return of a loan from former Adidas owner Louis-Dreyfus. Germany ended up winning the ballot for 2006 hosting by a single vote over South Africa.

The Freshfields report confirmed that the payment in question ended up in an account controlled by Qatar’s banned former FIFA powerbroker Mohammed bin Hammam, former president of the Asian Football Confederation, and was not intended for the World Cup opening ceremony gala as had been indicated by the organising committee.

Beckenbauer, fined earlier this year in a separate case for refusing to co-operate with a FIFA ethics investigation into the 2018 and 2022 World Cup bidding contests, has vehemently denied any involvement in 2006 vote-buying but has admitted: “In hindsight I may have made mistakes.”