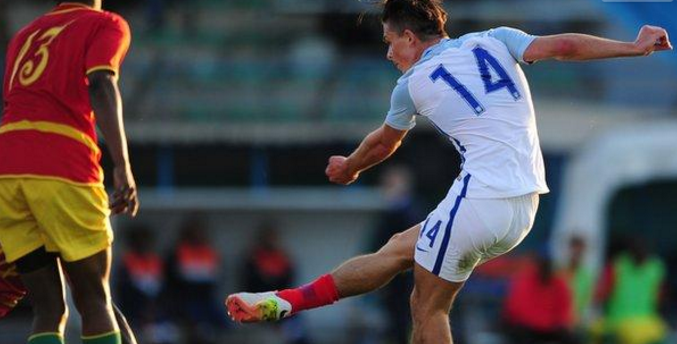 May 24 – The Toulon U23 tournament became a goal fiesta last night as England’s Under 21s hammered seven past Guinea to top their group above Paraguay on goal difference.

Not recognised by UEFA, the tournament (in its 44th edition) has nevertheless long been seen as a key development competition for national teams and is being used by the participating teams as a pre-Olympic warm-up.

England, of course, will not be in Rio because of a failure to agree a deal between the English, Northern Irish, Scottish and Welsh FAs to enter a Great Britain team into Olympic qualifying.

The England game against Guinea saw a parade of Premier League youthful talent, though Guinea scored within a minute of the start of the match before being swamped by the English.

Aston Villa’s Jack Grealish scored twice, as did Fulham’s Cauley Woodrow. Southampton’s James Ward-Prowse scored from the penalty spot while Norwich’s Nathan Redmond scored the goal of the match with a screamer from outside the box.

The winners of the each group progress to the final while the second placed teams head to the third-place play-off.

England face second placed Paraguay on Thursday in what looks like being the decider for the Group B.

Play continues today in Group A today with France facing Mali and Bulgaria up against Mexico. The Czech Republic lead the group by a point from France who they face later in the week in what will likely be the decider for qualification to the final.