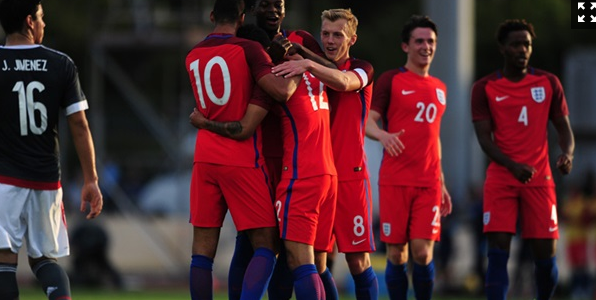 May 26 – England virtually guaranteed their place in the final of the Toulon Tournament with a storming 4-0 win over closest group rivals Paraguay. France need just one point from their final group game tonight to join them.

England continued their rich goal scoring form following their 7-1 hammering of Guinea earlier in the week. More goals from Chelsea midfielder Lewis Baker and Norwich striker Nathan Redmond came either side of a double strike from Chelsea’s Ruben Loftus-Cheek.

Loftus-Cheek had been rested for the Guinea game. England coach Gareth Southgate now has the luxury of resting players for the final group game with Japan on Friday.

Only a massive winning score line (9 goals or more) from either Paraguay or Portugal in their battle on Friday, can prevent England taking their final place, and that assumes England lose to Japan. So far England have scored twice as many goals as the next highest scoring team in the competition, France.

It is France who they are most likely to meet in the final on Sunday. The French need just one point from their match tonight against the Czech Republic to qualify. The Czechs lie second in the group, two points behind the French. A win would put them through to the final and confine the hosts to a third place play off most likely against Portugal or Paraguay.