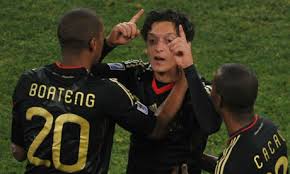 May 31 – Racial tension is building in Germany ahead of next month’s Euros in France after a right-wing politician’s  incendiary comments about international defender Jerome Boateng whose father is from Ghana.

Alexander Gauland of Germany’s Alternative fur Deutschland (AfD) party said in the Frankfurter Allgemeine Sonntagszeitung on Sunday that he would “not want to have Boateng as a neighbour.”

Fans at Germany’s friendly against Slovakia the same day held up banners in support of Boateng, who responded: “It’s sad that something like that still gets said nowadays. I’m happy to be German. I am proud, otherwise I would not be here playing for the national team. I think I’ve integrated well and I don’t think I have to say much more than that.”

Chancellor Angela Merkel’s spokesman described Gauland’s remark as “vile” leading to an apology from party leader Frauke Petry, only for another AfD politician to criticise Arsenal’s German midfielder  Mesut Ozil,  a Muslim of Turkish origin, after he published a photograph on social media of himself on a pilgrimage to Mecca.