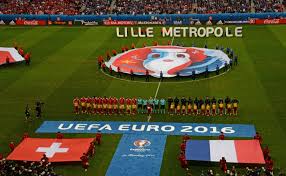 June 22 – As group-stage matches reach their conclusion today at Euro 2016, the appalling state of many of the pitches continues to dominate much of the debate about the success, or otherwise, of the tournament and why there have been so few memorable matches so far.

UEFA has ordered the pitch at the Lille to be hastily re-laid following tonight’s game between Italy and the Republic of Ireland because of “irreversible damage” caused by bad weather.

Italy are nevertheless furious that they are being forced to play on the surface before it is changed, with manager Antonio Conte slamming the decision.

“The playing surface definitely isn’t suitable. It isn’t up to hosting a European Championship match,” Conte told a press conference. “It will be the same for both teams but we expected a different pitch to this one. It’s a shame. This has been a well organised tournament but this pitch is not up to the standard of the competition.”

“I don’t like coming up with excuses for my players because we’ll play on this pitch as will Ireland. However, we did expect a different pitch to this one.”

The new turf will be brought from the Netherlands and laid on Friday but the Lille   pitch has already been relaid once this year. UEFA said of the emergency operation: “The extremely difficult weather conditions in the past few weeks have caused irreversible damage to the surface at the stadium,”

Europe’s governing body said they were “confident” the new surface would pose no problems for the last-16 match on June 26 and quarter-final on July 1.

French coach Didier Deschamps has weighed into the debate saying it was “shameful” to have played France’s 0-0 draw with Switzerland this week on the Lille pitch where several players slipped on the turf.

Lille isn’t the only stadium at the tournament to have prompted the wrath of coaches. Last week, Deschamps labelled the pitch in Marseille “a disaster” after the hosts’ 2-0 win over Albania. Even the national Stade de France in Paris which has been frequently used and will stage the July 10 final has been criticised.

In the month leading up to the championship, northern France suffered some of the worst flooding in decades. Heavy showers have continued across the country in June, even forcing Northern Ireland’s clash with Ukraine last Thursday in Lyon to be temporarily halted due to a flash storm.

Almost halfway through the month-long, 24-team tournament, the demands on pitches have never been greater at a European Championship.

Tournament director Martin Kallen admits playing conditions should be better. “The pitches should be better and we’re not happy,” Kallen told reporters. “We have taken measures to preserve pitches but in a summer tournament you don’t expect it to rain so much.”

UEFA meanwhile said repair work in Marseille and Paris was “already bearing fruit” and insisted they “should be in good condition within a few days”.