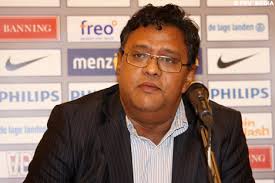 June 24 – The All India Football Federation (AIFF) is once again fighting fires. A rival futsal competition and the departure of two I-league clubs have caused new headaches for the federation that is managing the merger of the high profile Indian Super League into its professional league structure.

The AIFF has the authority over footballing affairs in India, but the Futsal Association of India, the FAI, is affiliated with the AMF, the global futsal association, not affiliated with FIFA. FAI has proposed plans to start Premier Futsal, a domestic futsal league across eight Indian cities starting from July.

Portuguese football legend Luis Figo (a former candidate for the FIFA presidency and a close associate of FIFA president Gianni Infantino) will be the chairman of the league and Indian superstar cricketer Virat Kohli has been named the brand ambassador. Falcao, the world’s most famous futsal player, has also joined the league and publicly backed the competition.

The AIFF’s response has been one of anger, but in the past the federation has done little to improve the futsal’s profile and develop the game. The federation sent a letter to the state associations.  “The AIFF is the governing body for all forms of football, including Futsal, in India and we will be announcing our plans in relation to Futsal in due course,” read the letter from Kushal Das (pictured), the AIFF secretary.

Earlier today Goan clubs  Salgaocar FC and Sporting Clube de Goa revealed in a joint statement that they would be withdrawing from the I-League in protest against the AIFF’s proposed roadmap for Indian football, which projects making the Indian Super League the country’s prime competition.

The statement lambasted the AIFF’s plans, highlighting that there would be no more incentive for clubs to participate in a re-structured I-League, in effect becoming India’s tier two league.

“Therefore, rather than waiting for another year to face the inevitable, Salgaocar Football Club and Sporting Clube de Goa have decided to take the painful decision to withdraw from the forthcoming edition of the I-League,” said the statement.