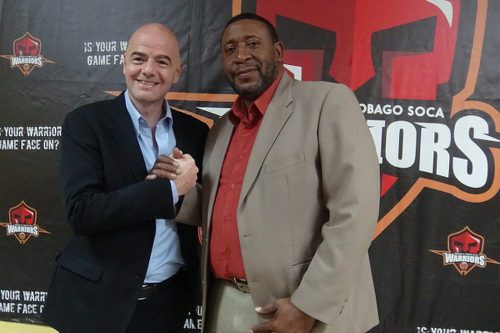 June 24 – Manipulation of football administration in the Caribbean is nothing new. But in a region desperate to shake off the long shadows of former presidents Jack Warner and Jeff Webb, the old ways of operating seem to be alive and kicking. They may have even taken a turn for the worse with regional confederation CONCACAF stepping into the game with the support of FIFA and its new president Gianni Infantino.

It is a new move in a powerplay that again questions the integrity of football’s regional and global governing bodies and the personal motivations and favours of their leading executives – in this case Infantino at the top of the FIFA tree, newly elected CONCACAF president Victor Montagliani and US Soccer Federation president and FIFA council member Sunil Gulati.

While Montagliani and Gulati will sit down this afternoon at a glitzy press conference in Times Square, New York, to doubtless bang the drum for their successful hosting of the Copa America Centenario, 31 of their CONCACAF member associations in the Caribbean will be wondering what the football future really holds for them and whether it is a bright one or in reality a removal from decision-making power and a consignment to the dustbin of world football and its development.

The controversy and battle for control of the Caribbean has been running for some months. The next steps in what looks like a ‘RICO-style’ conspiracy to remove control of Caribbean football from the Caribbean Football Union (CFU), the regional sub-body, were taken in Trinidad last weekend when 17 member association presidents met under the auspices of establishing a new Caribbean professional league.

The meeting took place via the financial provision of CONCACAF, FIFA and UEFA, though UEFA say they provided no money and have no commitment to getting involved in Caribbean football politics.

Organised by Trinidad and Tobago football’s new president David John-Williams (pictured with Infantino), the invitations failed to extend to CFU president Gordon Derrick or general secretary Neil Cochrane. Though CONCACAF did have two observers at the meeting.

That John-Williams was even mandated to host the meeting is controversial in itself in that it is becoming evident that his election to the Trinidad and Tobago presidency broke election rules, and that FIFA knew rules were being broken but chose not to intervene.

Trinidad journalist Lasana Liburd wrote on this issue and his story gives full background at http://wired868.com/2016/06/24/djw-unplugged-an-illegal-ttfa-election-tacit-fifa-support-and-a-cfu-power-grab/

Trinidad’s John-Williams was a supporter of Infantino in the presidential elections in February and had surprised his Caribbean colleagues by declaring for him in Miami at a CFU meeting in January, a meeting that was convened to discuss CONCACAF and FIFA’s reform proposals and the candidates for the presidency.

Now it appears Infantino is making good on promises made to John-Williams to support his personal ambitions as the Trinidadian prepares for what has become a widely expected bid for the CFU presidency. A bid that is being supported centrally by CONCACAF and its North American rulers.

Infantino announced just 4 weeks ago at the FIFA Congress in Mexico that FIFA would be working through its confederations and sub-federations and providing $1 million of financial support annually to bodies like the CFU. A promise that is looking very hollow in the case of the Caribbean in light of the FIFA ad CONCACAF sponsored political manoeuvring that is currently taking place.

That Caribbean football would be enhanced by a competitive professional league is in no doubt. It is a project that has had a number of planning attempts, most recently by CONCACAF under Jeff Webb in 2014 when a task force was formed.

To attempt to organise that league outside the auspices of the CFU but with CONCACAF money that, in terms of governance protocol should have been funnelled through the CFU, raises serious questions about CONCACAF’s own reform and the integrity of its officers and president Montagliani. Montagliani was a member Francois Carrard’s FIFA reform committee, as well as a member of CONCACAF’s own reform body.

To not even invite the CFU to be part of the discussion borders on the unbelievable. More so when taking into account this brave new world of global football reform that CONCACAF, and Montagliani and Gulati in particular, have worked so hard to impress on the world’s media that they are in the vanguard of.

The answer to why the CFU has been excluded seems to lie in the north American (and US in principal) desire to get control of the CFU member association votes for their own political objectives. The Caribbean votes have often been king makers in FIFA elections in the past and while that block has now been split, it would be a powerful block to control in the future.

For the north Americans to take that control they need to replace current CFU president Gordon Derrick with their own man – in this case John-Williams.

In the recently completed CONCACAF elections Derrick was removed from the presidential race by FIFA who said that he had failed their integrity check. A highly dubious decision that FIFA was unwilling to explain though speculation at the time was that it was a decision made at the bidding of CONCACAF’s executive members and legal consultant Samir Gandhi. Speculation that has of course been denied.

Following the Trinidad meetings rumours have been circulating, emanating from attendees, that a similar move is being prepared by CONCACAF and FIFA to have Derrick removed from standing again for the CFU presidency. This would clear the way for a complete fracturing of Caribbean solidarity.

Ironically Derrick was a member of CONCACAF’s reform committee and in large part responsible for getting CFU members to agree to the reform proposals. Without that Caribbean support the proposals would never have been passed. But, frankly, the way the reform has been politically implemented subsequently makes a mockery of those reforms in the first instance.

The proposals put before the member associations at the Trinidad meeting outline a 14-team league with a three-year target revenue figure of $65 million, of which $18 million would be targeted to come as seed investment from FIFA.

In an increasingly politically charged Caribbean football world, associations will have to work out who is fooling who in this battle for power, whether financial promises are real and can be substantiated, and whether individual gain is greater than regional solidarity. Ultimately it is a battle for football sovereignty in the Caribbean associations.