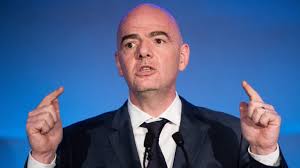 July 4 – Speculation that the net could be closing in on FIFA president Gianni Infantino has been intriguingly stepped up following the publication of an explosive leaked memo, seemingly on official FIFA letter-headed paper, that accuses Infantino of a series of ethics violations.

Last week Germany’s Frankfurter Allgemeine (FAZ) newspaper reported that FIFA’s ethics committee is in the process of launching a preliminary investigation over possible conflict of interest, with a key area where Infantino looks exposed from an ethics and expenses standpoint being his alleged use of private jets for official travel, and personal use.

Switzerland’s Sonntagszeitung has now added considerable weight to the rumours by releasing an 11-page English-language memo, the author of which is blanked out but which was sent on May 23 – 10 days after the FIFA congress in Mexico – to Sindi Mabaso-Koyana, who took over as acting head of FIFA’s Audit and Compliance following the resignation of Domenico Scala.

A major factor that went against former FIFA general secretary Jerome Valcke, currently banned for 12 years, was that he travelled at FIFA’s expense without any business rationale for doing so.

Thus a precedent looked to have been set and attention has been focussed for weeks on whether Infantino similarly used private aircraft especially a trip from Milan to Rome (with his wife and mother) after the Champions League final to visit the Pope and then on from Rome to Geneva. Reports alleged one or more of the flights was arranged by a well-known Russian oligarch using an aircraft that belonged to one of his companies.

FIFA has denied that any of their funds were used but someone, somewhere booked the flights and someone covered the costs; so far no-one has come clean.

According to the memo sent to Mabaso-Koyana, the author said it was his or her “duty to report cases of potential breaches of regulations and other non-compliant  activities.”  It further claims that Markus Kattner, the FIFA finance chief recently dismissed with immediate effect, had been informed of  “questionable transactions” by lnfantino and had raised them with him.

Whilst it cannot be confirmed, it is understood the author of the leaked document has since resigned from FIFA but if true, the allegations made are highly incriminatory just at a time when Infantino is hoping the dust will settle after a torrid few weeks since succeeding Sepp Blatter.

Among the allegations are that Infantino breached the spirit of governance rules by choosing his own candidates for various positions and that he was instrumental in giving FIFA’s new ruling Council the power to hire and fire members of independent bodies. The statute change effectively blew away much of the trust observers had been expressing in the independence of the ethics process and led to Scala’s resignation.  “Such changes gave Gianni lnfantino the possibility to get a number of persons being close to him on board of the standing committees,” the memo said. “This undermines all efforts taken up to date, to strengthen FIFA’s governance.”

The amount of detail suggests the memo was written by someone high up in the FIFA administration, believed to be within the Audit and Compliance department. More serious for Infantino is the suggestion that he repeatedly breached FIFA’s code of conduct when it came to the afore-mentioned flights which are individually identified.

“Gianni lnfantino flew on a number of occasions with private jets which were not organised by FIFA,” the memo states adding that no invoices “have been received up to (the) date of this report, nor was the usage of a third-party paid aircraft announced to the compliance department,” as is required under FIFA rules.

Then came the coup de grace which seems bound to heap even more pressure on Infantino.

“ According the article 19 of the FIFA Code of Ethics, situations shall be avoided that could lead to conflicts of interest.”

“ As with FIFA’s regulations, such private jet flights to Moscow, Doha or Slovenia are not possible, hence the private jets paid by third parties is considered a personal advantage.”

To add insult to injury the question of Infantino’s as yet unsigned salary contract is also flagged up in considerable detail as are a series of questionable expenses other than the use of private aircraft .

In conclusion, Mabosa-Koyana is encouraged to pass the file on Infantino to the ethics committee “as this report is related to a FIFA official.”

It is understood that the South African businesswomen has done that and a preliminary investigation has been conducted. The next stage would be to upgrade it to a full investigation which could potentially mean an immediate suspension from duty for Infantino.

The leaked memo can be downloaded in full by clicking on this link: http://soz.li/qted