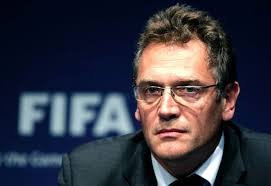 July 6 – FIFA’s appeals committee has cut the suspension of former secretary general Jerome Valcke (pictured) from 12 years to 10 and reduced Asian football powerbroker Chung Mong-joon’s ban from six years to five, though both moves represent only partial success for the two senior officials who served under the Sepp Blatter regime and were determined to clear their names.

Valcke, Blatter’s right hand man for nearly a decade, was dramatically sacked in January and banned for financial impropriety over television deals and World Cup ticket sales plus expenses abuses.

Chung, a former FIFA vice president, was found to have contravened rules while lobbying for South Korea’s bid to host the 2022 World Cup, which was awarded to Qatar in 2010.

Valcke is reported to have met last month with the appeals body which has now confirmed that he was guilty of serious offences but that “mitigating factors had not been fully assessed by FIFA judges.” Although his ban was reduced his SFr100,000 fine was maintained. Swiss prosecutors have also opened a criminal investigation targeting Valcke over “various acts of criminal mismanagement”.

Chung, the billionaire scion of the Hyundai family, had at one stage been a candidate to replace Blatter but ultimately withdrew from the race which saw ex-UEFA secretary general Gianni Infantino elected.

He blasted FIFA for sabotaging his bid after his suspension came into force in October and the appeals committee said the evidence against him was “not sufficient” to support a six-year-ban.  It also reduced his fine from SFr100,000 to SFr50,000.