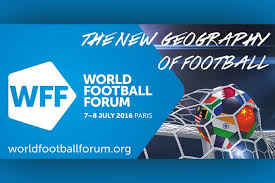 July 8 – The World Football Forum opened in Paris this morning – the night after Parisiens had celebrated their victory over Germany in the Euro semi-finals with a long and hard street party – with a focus on the ‘new geography of football’. It seemed to be a case of while the ‘old’ football world is recovering from its hangover, the new football landscape is putting its marker down for the future.

Mike Pfister, senior development officer at FIFA, explaining the new development regime within FIFA said the “emerging football powers in Asia” offer an exciting opportunity for football. “The emerging markets where there are large populations, booming or at least stronger economies – the Philippines for example was reporting 5% economic growth – and growing markets, are good things to connect with the passion of football.”

The anomaly in the market is still that in South East Asia, for example, where people are passionate about football, “they will stay up late to watch Champions League but this is in stark contrast with their interest in local football”, said Pfister. It is this imbalance that needs to be broken down or at least adjusted.

Pfister emphasised that FIFA is not alone in doing this. “When you work in development you rely on the framework and conditions on the ground and their capacity…We work very closely with individual confederations because they are your multipliers. Co-operation is extremely important.”

Pointing out that there was a big difference between the football marketplaces in India and China, Pfister pointed to the Under 17 World Cup in India next year as providing the opportunity for football to boost its local presence. “It is a new opportunity to step up the speed and power of football development in the country,” he said.

The focus in India, a vast country with federal states larger than many countries, is to work with state bodies and “train technical directors in states so they can run their own competitions”, it is about “providing opportunities to play and organise competitions”.

For the Under 17 World Cup India is running the ’11 million’ project, which aims to connect 11 million children to football via the U17 event.

While India is very much a young football market – until 2005 it didn’t have a permanent HQ and it wasn’t until 2011 that a general secretary was appointed – in contrast China has a club culture and fan base that is far more developed.

In China Pfister said that the development drive is to spread football west into the provinces. Key to this is government support and programmes. “Independence can quickly lead to irrelevance if you don’t manage it very well,” said Pfister.