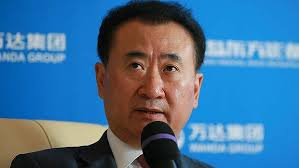 July 14 – China’s emerging influence in world football has taken yet another decisive step with the news that real estate, entertainment and sports conglomerate Wanda has struck a deal with FIFA to host an annual ‘China Cup’ tournament starting next year featuring its national team plus three other as yet unannounced international sides.

Wanda, which four months ago became a top-tier FIFA sponsor,  said it would invite “first-class national teams from Europe and the Americas,” so that China could learn from playing against high-quality opposition. The competition, approved by the Chinese Football Association and the Asian Football Confederation, will count towards FIFA world rankings.

Wanda chairman Wang Jianlin (pictured) said China, which is putting huge resources into the domestic game in a bid to strengthen the national team which is currently 81st in the world ranking, was determined to become a powerful force across Asia. “We aim to become the best football competition in Asia. We will use all possible measures to ensure we achieve this,” he said.

“We hope to provide a platform for the Chinese national team to improve through drills againstworld powers and thus contribute to the game’s rise in China.”

In April, the Chinese FA announced a comprehensive programme to transform the country into a world football power by 2050 and last week Chinese football was at the forefront of the World Football Forum summit in Paris.

The inaugural China Cup International Football Championship will take place in Nanning, capital of the Guangxi Zhuang autonomous region, from January 9 to 16, 2017 on a round- robin basis. The plan is to gradually expand the competition to eight sides.