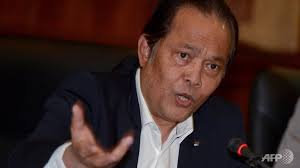 July 15 – From day one he has protested his innocence but the net appears to be closing in on Thailand’s controversial former FIFA executive committee member Worawi Makudi (pictured).

Makudi was an FIFA exco member for 18 years until being voted off by Asian federations in April 2015 and was one of those who voted in the controversial ballot to choose the 2018 and 2022 World Cup hosts, a process under official investigation by the Swiss judicial authorities.

He has faced multiple allegations of wrongdoing and was found guilty in July last year by a Thai court of forgery in the 2013 re-election as head of his own football association and handed a suspended 16-month jail term.

Now the investigations chamber of the FIFA ethics committee has recommended a ban “for no less than four years” and a fine of no less than €25,000 on Makudi “for alleged violation of the general rules of conduct (art. 13 par. 1 to 3 of the FIFA Code of Ethics (FCE)), loyalty (art. 15 FCE), forgery and falsification (art. 17 FCE) and the obligation of the parties to collaborate (art. 41 FCE).”