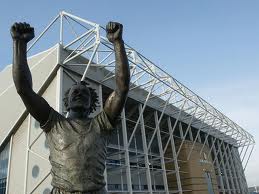 July 29 – Chinese investors are reportedly circling around a third English Championship club. Leeds United, like Aston Villa and Wolverhampton Wanderers that are both under new Chinese ownership, are considered a ‘sleeping giant’ waiting to return to their glory years. Chinese money could provide the boost they need to achieve this.

Aston Villa, relegated last season from the Premier League, were the subject of a £60 million acquisition by Tony Xia’s Recon Group, while Wolves were acquired last week Fosun International for £45 million last week with a commitment to inject a further £30 million into the club.

Leeds United, according to Chinese reports, would require £100 million for new owners to take control and enable the club to mount a credible push for promotion to the Premier League. The club’s value is reckoned to be about £60 million.

Leeds United are currently owned by controversial Italian businessman Massimo Cellino who struggled to pass the Football League’s fit and proper persons test. He took over after a period of boardroom uncertainly but did not replace the old ownership with the stability on and off pitch the fans had been hoping for.

Cellino, who has owned the club for two years, was banned by the Football League in 2014 after being found guilty of tax evasion in Italy and recently had another ban overturned. He has said he is willing to sell the club if he received the right offer.

The Chinese consortium understood to be in talks with Leeds has been put together by Steve Tappin, the chief executive officer and founder of consultancy Xinfu. His group group is made up of leading Chinese entrepreneurs and a private equity group.

A life-long Leeds fan, Tappin told the China Daily newspaper: “I have had a series of meetings with related parties all this week and there is definite interest in buying Leeds but I want to ensure it would be with long-term investment, significant working capital and the right governance so it can be a stable platform for sustainable Premier League success.”

The Championship is increasingly becoming a big money battleground for investors with another giant from English football’s past, Nottingham Forest, waiting to see if Greek billionaire and Olympiakos owner Evangelos Marinakis is cleared by the Football League to buy a controlling stake in the club.

For all the new investors the lure is the wealth of the Premier League and the potential of achieving that status with a neglected brand but one that could become great again.