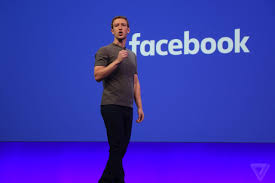 July 29 – As if on cue, as Facebook’s millionaire founder Mark Zuckerburg (pictured) announced that the social media giant’s future would be ‘video’, so Liverpool launched their third kit via a Facebook Livestream directly from Facebook Headquarters in San Francisco.

Zuckerberg announced Facebook had generated £5 billion in ad revenue in the last three months in a financial statement yesterday, saying that the social media platform is “particularly pleased with our progress in video as we move towards a world where video is at the heart of all our services.”

Facebook has been increasingly active in the broadcast sports rights market and is expected to become a competitor for premium live rights going forward.

Currently on pre-season tour in the US where the club are taking part in the International Champions Cup, Liverpool’s news announcement at Facebook’s headquarters was opportune. Manager Jurgen Klopp and first team players were on hand to model the strip.

The new third kit from New Balance comes in what the club describes as Toxic and Thunder green.

Toxic and thunder could be how Facebook’s arrival in the video rights broadcast market could be described in the next couple of years as the broadcast landscape from live football rights is expanded and potentially re-drawn.