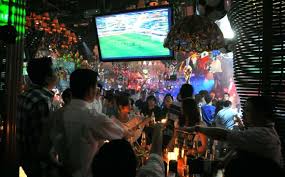 The Communist government in China has long had an uncomfortable relationship with gambling, but the mounting interest in sports betting may make the country’s leaders rethink some of its policies.

Gambling has been outlawed since the establishment of the “new China” by Mao Zedong. Despite the government’s effort to quash nearly all forms of wagering, people’s love for gambling only seems to grow as the average income rises. Lately, this trend has been aided by President Xi Jinping’s promotion of the sports industry, especially in the sport of soccer. During the UEFA Euro 2016 tournament, police seized tens of millions of dollars and arrested over 500 people in crackdowns on illegal gambling operations.

Current Chinese law bans all sports betting except in the form of the government-run Sports Lotteries. The country’s criminal law makes it a crime punishable by imprisonment of up to three years to operate a gambling establishment, whether in-person or online.

As more and more gambling activities moved online, the Chinese Supreme Court issued the Opinions of the Supreme People’s Court, the Supreme People’s Procuratorate and the Ministry of Public Security on Several Issues concerning the Application of Law in the Handling of Criminal Cases of Internet Gambling (the “Opinion”) to provide clearer guidance on the issue of Internet gambling. The Opinion extends the reach of the criminal code and related regulations by broadening the jurisdictional coverage and expanding the definition accomplice crimes.

Generally, a case is under the jurisdiction of the authorities “where the crime is committed.” The definition of the phrase “where the crime is committed” seems to be all-encompassing. In addition to the location where the gambling participants commit the online gambling acts and the place where the Internet access is provided, it also includes the location of the server of the gambling sites and even the place where the sponsor or manager of the gambling site is domiciled. Under certain circumstances, prosecution can also happen in the place of domicile of any of the defendants. Moreover, a party that provides Internet access, server hosting, advertising, technical support or other services to a gambling site may be deemed as an accomplice in the crime of operating an online gambling house.

Although individual gamblers are subject to the same betting prohibitions, the law is rarely enforced against them because most of the individual online betting activities are extremely difficult to pin down, and the “reward” of such enforcement is minimal compared to crackdowns on the operators.

Under the Detailed Rules for the Implementation of the Regulations on the Administration of Lottery, the only sports betting operation permitted in China is the Chinese Sports Lottery, which authorizes wagering on soccer, basketball, and baseball. Even this official lottery, however, does not allow betting on Chinese Super League matches.

As Adam Minter argued in his Bloomberg article China Should Let Soccer Fans Gamble, “China needs to make peace with its love of gambling – and legalize it.” The vast network of underground sports betting operators is known to have caused many match fixing scandals as they operate outside the legal framework. Regulating the conduct of bookies and punters will improve the integrity of Chinese sports.

The banning of sports gambling is also robbing the Chinese government of billions of dollars in tax revenue. China’s illegal gambling industry is estimated to be worth a staggering 600 billion dollars annually. Because Chinese jurisdiction cannot reach foreign online operators who have their place of business and servers outside of China, many Chinese bettors place their bets on foreign websites. Since President Xi announced his plan to make China a world soccer powerhouse, the sports sections of international media have been filled with headlines of record-breaking purchases of foreign soccer stars by Chinese clubs. As a result, the interest and viewership of the Chinese Super League are burgeoning, and so is the urge to bet on the teams in it. By handing the opportunities of sports betting operations to foreign and underground players, the government is missing out on a profitable and increasingly significant tax revenue.

The Chinese use the proverb “plugging one’s ears while stealing a bell” to refer to the ignorance and foolishness of a person who deceives himself as well as others. What the Chinese government is doing with sports betting is exactly that. The day when China legalizes American-style fantasy sports betting is still very far away, but it should at least start transitioning into allowing approved private operators to take bets under a well thought-out set of regulations.

Nan Sato is a lawyer in the Global Sports and Entertainment Practice Group of Shimin Law’s New York office. Shimin Law is a is a full-service law firm with a focus on foreign-related legal matters, providing legal services to their Chinese and foreign corporate clients. View the Shimin Law blog at https://chinaselaw.wordpress.com/