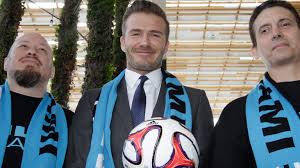 An MLS franchise enables the buyer to own the marketing rights to a team name and play that team together in a market agreed with the MLS. The owner doesn’t own the team outright. At $200 million, the cost of an MLS franchise would make it more expensive by about $70 million than the recent acquisition of Premier League Swansea City.

To a degree an MLS investment is protected because MLS teams can’t get relegated. But they can go bust or disappear, as Chivas USA did when it sold its franchise back to the MLS. That Los Angeles franchise slot has now been resold to LAFC for a reported $110 million, with the team expected to start play in the 2018 season.

The MLS currently has 24 franchises filled and says it wants to expand to 28. With a $200 million buy-in it will test the appetite of investors and markets that would have to support the team with a football-specific stadium as well as players. It may push the smaller cities that had been pondering bids out of the reckoning.

MLS is currently breaking all records with attendances averaging 21,109 and new TV deals starting to kick in worldwide. But MLS Commissioner Don Garber told ESPN the league is still losing money but would not put a figure on how much.

“We’re still in investment mode,” he said. “But there’s a lot of momentum for the sport of soccer in the U.S. and Canada and that is empowering.”

Reports from Sacramento, one of the markets that wants to upgrade its current USL team to an MLS franchise, were that the new franchise numbers being talked about were stretching what could be afforded, with $125-135 million reckoned to be closer to what that market could pay.

St. Louis, San Diego and St Paul are all interested or in discussion over franchises, while Las Vegas still stands out as a major US city without a major league team in any sport. Atlanta has also been suggested as being a potential new city.

Beckham’s Miami progress has been slow. The area already has two professional soccer teams – Fort Lauderdale Strikers and recently debuted Miami FC. They play in the NASL which has expanded its teams and is looking to grow further. Both clubs have big name owners and marquee players and would be a challenge to an MLS franchise in the Miami market.

Beckham’s on-off Miami relationship now appears to be settling on the former Orange Bowl site, with the stadium financed privately and built on city-owned land at an estimated cost of around $200 million. To build he will need some big money investors to come in with him in what is a market that already has two pro-soccer teams.

But what Beckham does hold are the keys to a very cheap franchise, potentially $175 million cheaper. For the MLS one simple equation is whether Beckham’s name will fill that $175 million in value. If the answer is no, they are unlikely to be too bothered if the iconic Englishman drifts away into the sunset as the cash value of their franchises are pushed higher.