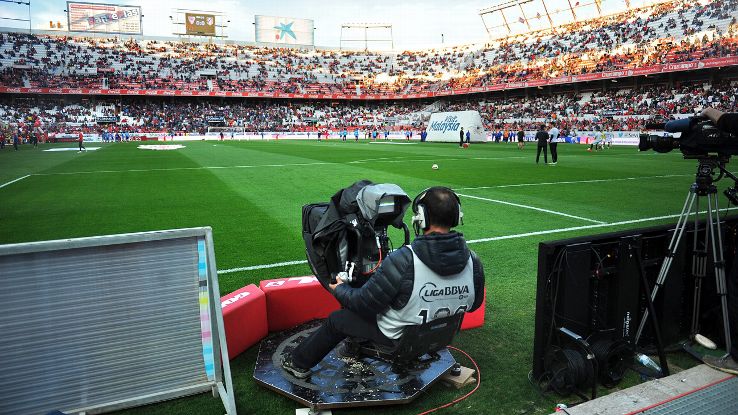 August 7 – La Liga, keen to boost its international broadcast profile and revenue, has issued guidelines and a warning to clubs that if their stadia are not seen to be 75% full on the television transmission they will fine their clubs.

If stadiums look to be below 50% full then the fine will be doubled. Match delegates are to police the capacity by taking photos in the 30th minute of the match.

La Liga is chasing down international broadcast deals on a par with the English Premier League, but has a long way to go. An important element for broadcasters buying leagues is that stadia are full, hence creating an atmosphere that can be communicated in the broadcast.

69%, according to KPMG’s Football Benchmark figures.

The La Liga recommendation is for clubs to locate fans in the stand opposite the main TV camera. It even suggests clubs should sell season tickets for these areas first.

“La Liga strongly recommends accommodating and other spectators on the match day between the two corners of the main stand opposite the main camera,” say the guidelines.

“This stand should be at least 75% full, if not the sanctions set out in these regulations shall apply. This sanction will be doubled if occupations falls below 50%.”

But it is not all bad news and threats of sanctions for the clubs.

The advisory says: “If any club that considers that some areas of its stadium – that are not usually shown on television – are usually empty, La Liga will finance the installation of tarpaulins to cover them.”