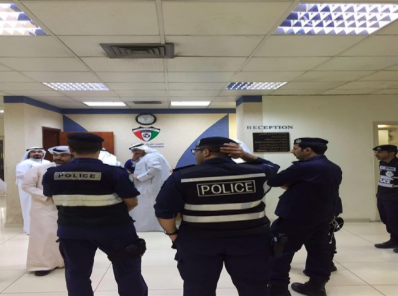 There were strong hints from the KFA that the police visit was uninvited and that it was a direct response to the government’s failed legal challenges against the FIFA and International Olympic Committee suspensions imposed last October.

A statement in English on the KFA website, entitled “Kuwait Police in KFA headquarters”, read: “After they lost court cases in CAS & Swiss Court, Police and other government authorities bodies [sic] at Kuwait FA headquarter. Kuwait Olympic Committee headquarter is there [sic] next destination.”

The episode is the latest in a series of disputes between government and the sports authorities and their officials. It began when the government introduced laws empowering it to dissolve all Kuwaiti sports federations.

When the international sports authorities suspended Kuwait over this government interference, it turned its fire on the FIFA Council member Sheikh Ahmad Al-Fahad Al-Sabah. The Kuwaiti national was accused of masterminding the FIFA ban and the Olympic Council of Asia, of which he is president, was forced out of its Kuwait City HQ.

An overseas law firm was engaged to file court cases against the Kuwait Olympic Committee, the KFA and the national swimming, basketball and volleyball federations. These failed, which, according to the KFA, prompted the police intervention this week.

There is no sign of the suspension of Kuwait ending. In June the government introduced more sports laws. Independent MPs described the latest legislation as exerting “bigger government control over sports” and “a dangerous indication of the government’s interference in sport.”