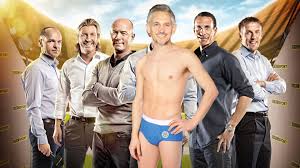 August 12 – Will he stick to his promise? Halfway through last season, as Leicester City, 5000 to 1 outsiders at the start of the campaign, looked like they might win the English Premier League title, former England striker and BBC television presenter Gary Lineker boldly proclaimed that he would appear  in his underpants at the start of this season’s campaign if his beloved Foxes somehow went go all the way.

So not surprisingly, ever since the rank outsiders romped to the most unexpected triumph in Premier League history, fans have wondered throughout the summer whether Lineker will keep his word.

Which is why there is expected to be even greater anticipation than usual for the start of the hugely  popular football roundup programme, Match of The Day.

Lineker, who played for Leicester and is a massive fan of the club, his keeping his cards close to his chest, so to speak, but it is expected that after his fit of bravado he will have to fulfil his promise on Saturday when he introduces a show that has been on British screens for half a century and is a nationwide institution.