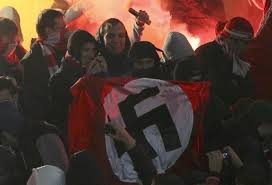 It only took three days for football’s most important news to disappear from the sports pages. It had never reached further than that to begin with. People are more interested in cats that perform ludicrous acts on the internet than giving a damn for the rampant racism that stares in our face every day. Everywhere.

The new breed of Eurofascists from Holland to Hungary determine some of the headlines, as they demand the elimination of refugees and economic migrants alike – with the staunchly denied fact well hidden that, were they white and Arian as those revolting fascists themselves, the issue would hardly arise.

It took only a few days for football’s master planners to declare – remarkably through the lips of a black woman – that FIFA’s laughable Task Force against discrimination was no longer required because it had fulfilled its mission.

To begin with, that Task Force was a complete joke from start to finish. It hadn’t met for a year, and before that it hadn’t delivered a thing. Naught. Nada. Zero.

Pretty much the same is true for many of FIFA’s task forces, special committees (the high-flying Strategy Committee comes to mind) or special projects: grand announcements of heroic deeds to follow.

For once, Gianni Infantino cannot be blamed: most of this stupidity and hypocrisy was launched before his time. But to announce victory over racism in football without having done anything that can be pointed at, is odious and ridiculously hypocritical. If not plain idiotic.

But FIFA’s new guard, aided by clueless American comms mercenaries, understands how to bury news (mind you: not this time) and to select the right time to make a shameful announcement (although this time their efforts were ridiculous). What GI’s team of obfuscators has managed properly thus far, is assess the damage a particular message can generate and release the damaging message when a huge event of public interest takes place.

This time, they also assessed the situation well: at a time when US cops are shooting black men like rabbits in a green field at least once a week, FIFA announces their efforts against racism to be concluded and resolved. And they were right to do so in their perverted calculation and assessment of the public interest: nobody gives a damn.

There was a little bit of fake furore by some, others said pleasantly critical things, while the vast majority of consumers and writers barely noticed, if at all. People have other worries to think about. White people, that is. They worry about the price of chocolate, about the cost of a train ticket, the gruelling pictures that inundate tv and deliver horror from Aleppo into every living room, they worry about Donald winning the presidential election (although it seems that most people don’t), about migrants raping young girls (although their own citizens are far better at that heinous crime), about ways to rid themselves of the damned refugees in Australia and about such things as a sale at Primark.

At a time like this, Gianni Infantino chose his timing well. He announced the culling of a Task Force that was useless to begin with. Not because of the people that were called to be its Members. But because FIFA never gave a damn about racism.

And FIFA clearly doesn’t give a damn still.

Except that nobody cares.

The world has become numb to humanitarian values, let’s face it. We are overwhelmed and overrun by, and overexposed to horrors that would shatter a well thinking human being’s values in its core. We look at torn off limbs and flick the channel to learn how to combat yeast infection, we notice an unarmed man slaughtered by 9 police bullets and handcuffed thereafter (he was already dead) on prime time news and flick the channel again to learn about the imminent dangers of obesity. We see a dying little boy sitting on an orange chair but move on and select a channel where the Walking Dead eat each other’s eyeballs and laugh heartily about it.

WE have become an utterly sick society where a bunch of halfwits solemnly declare that racism is no longer an issue, that discrimination has been resolved in football and that we can all move on happily and change the channel (of life) and watch birds of prey devour a rabbit on the beautiful green fields of Africa.

That’s why FIFA’s heartless and brainless apparatchiks did the right thing when they solemnly declared that “the work of the Anti Discrimination Task Force is no longer required” because everything is fine and dandy. They understand that nobody really cares and that they can happily move on to release any type of nonsense: the idiot public gets excited for 3 days – tops – and moves on to dream about the new iPhone and the gluten free revolution that promises to fight morbid obesity.

The morbid obesity I am talking about, the one that destroys our so-called civilised western societies, has nothing to do with weight. It has to do with brains or rather the lack of it.

Let’s flick the channel and see how headache-free the world can be if we gobble up enough pills that promise happiness. And if all of this sickens you, you are not qualified to run football. Better accept that.