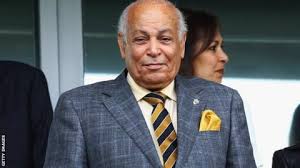 October 21 – The sale of Premier League Hull City now appears to be a race between three different parties, two of them from China and a third group believed to be predominantly European money.

Yesterday Greater China Professional Services Ltd (GCPS) and Camsing Global announced to the Hong Kong stock exchange that they had a heads of terms agreement to buy the club for £130 million.

Former chairman Adam Pearson is advising on this deal. Neither the club or the Allam family owners have made a formal statement.

Local newspaper the Hull Daily Mail has reported that the Allams (Assem Allam pictured) are still “open to offers” and that they do not consider the heads of terms agreement with GCPS as exclusive or preventing them talking to other bidders.

The family believed they had sold the club in August to another separate Chinese group only to have that deal fall through when the Dai family failed the Premier League’s ownership criteria. The sale will now likely go to the group that can mobilise fast enough and at the right price, and get through the fit and proper person tests unscathed.

This season, having returned to the Premier League after a year in the Championship, club turnover is more likely to be closer to £150 million, making the GCPS offer less than one times revenue. Profit could be as much as £25 million.

The risk factor in the equation is whether Hull remain in the Premier League. They are currently outside the relegation places by a point but have lost five of their last six league games.

The other bid on the table is from Chinese-American businessman Chien Lee, owner of French club Nice, who has another former chairman, Paul Duffen, as an advisor.

The third group preparing to bid is believed to be German-based and advised by former Football League chairman Keith Harris. Merchant banker Harris has a host of club sale deals to his name including Chelsea, Manchester City and Aston Villa. He has previously mooted a bid for Manchester United, a club which he supports and was on the board of when it went public prior to the acquisition by the Glazer family.