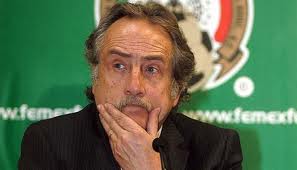 November 1 – Mexico, the first country to host the World Cup twice, now wants to be the first to stage it  three times and is prepared to do so alone rather than jointly with the United States.

“I don’t know [whether we would pursue a joint bid] but the rules are already open to it,” Decio de Maria (pictured), the FMF president, told ESPN.

“What was agreed upon makes the path perfectly clear. Mexico will be in the hunt to host the 2026 World Cup,” he said.

CONCACAF seems almost certainly to be hosts in 2026 and FIFA will announce in January how many teams will contest the World Cup finals from then onwards, with an expanded tournament to either 40 or 48 countries highly likely.

Whether Mexico could handle that on its own is one big question but its national league averages more than 27,000 fans a game, fourth in the world behind Germany’s Bundesliga, England’s Premier League and Spain’s La Liga.

With a capacity of more than 100,000, the Azteca Stadium in Mexico City is one of the most iconic stadiums in the world, having hosted the 1970 and 1986 World Cup finals.

Two new stadiums, both costing $200 million, have been built in recent years in Guadalajara and Monterrey.