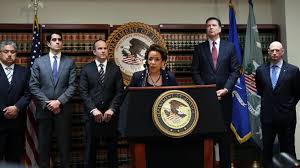 On May 27, 2015, in Brooklyn, New York, Loretta Lynch, Attorney-General of the United States, made a media-savvy appearance. Accompanied by her subordinate (“I am honored to be joined today by Director James Comey of the FBI […])” she highlighted a series of charges that put a number of mainly non-US football officials into serious trouble: “[The individuals indicted today] were expected to uphold the rules that keep soccer honest, and to protect the integrity of the game. Instead, they corrupted the business of worldwide soccer to serve their interests and to enrich themselves.” And she hit out further at FIFA when she declaered: “[…] The indictment also alleges that corruption and bribery extended to the 2011 presidential FIFA election […]”

Now, Loretta Lynch is a powerful person. As US Attorney-General she heads the Department of Justice (DOJ) and is the ultimate federal prosecutor of the United States. She is also the boss, if you want, of the FBI Director Comey, whose agents have so very well served the world as its policemen over decades, and whose significant achievement of late in football culminated in that memorable May-day in 2015, when FIFA’s world collapsed, never to recover from the blow.

The achievements of two people therefore, who are the shining lights of (US) justice. Of decency and honesty. Of absolute transparency and fairness. Of complete independence. Of justice altogether. Without any bias.

Or, are they really?

Ever since Comey’s bizarre interventions in the recent US presidential “election”, first clearing Hillary Clinton of any criminal conduct with regard to her use of private (unprotected) servers that were used in private email traffic, and some of which contained classified information, then announcing 10 days before the election that the FBI had started a new investigation, this time involving Mrs Clinton’s (classified) emails miraculously found on the laptop of a former New York highflier politician, whose sexting with a girl of 15 led to his demise. Mr Comey said that there were 650,000 of Mrs Clinton’s emails on Mr Wiener’s laptop (a fitting name for a man who sent around explicit pictures of his manhood). But mirror, mirror on the wall, who IS the fairest of them all? Hillary Clinton of course, because only eight days later, the same Comey, allegedly directed by Loretta Lynch (as claimed by Members of the House), cleared Mrs Clinton for the second time of any criminal wrongdoing – much to the displeasure of the US Congress and its relevant Committee.

In a country where nothing remains secret, ever, a media frenzy ensued and it was quickly established, claimed, whatever, that Comey was ordered by Loretta Lynch (yep: the same Loretta Lynch who so keenly pursues the bad men of CONCACAF and CONMEBOL) to stop with this email nonsense and clear her friend, the (then) assumed next US President. So Comey did, and with it, destroyed his own credibility and that of the FBI within a day.

The very woman who liked to be known as the “FIFA Slayer”, the one upright person in the world who fights corruption and locks up bad men, that very woman suddenly found herself in hot water. A Congressional Committee called her to testify. To actually see and hear her (non-)responses is worth five minutes of your time: https://www.youtube.com/watch?v=wCZwxtOoT64&feature=youtu.be And if this were not enough, why not engage with this original clip as well: https://www.youtube.com/watch?v=EzXjkrNFBOA

YourNewsWire.com compiled the remarkable grilling of the US Attorney General, and wrote: Congress Forces Attorney General To Admit Why She Let Clinton Off The Hook. The piece continued to say: Lynch, an appointee of the Obama administration, met with Bill Clinton on her private plane a few days before the recommendation not to prosecute Hillary Clinton was released. The Attorney General maintains that the case was not discussed – they spoke about grandchildren, she says – however every sane person in the country, and that includes some Members of Congress, find that hard to believe.

So here we have it: the very woman who is the Clintons’ personal friend, who secretly met with Bill Clinton in a private jet to discuss not the email troubles of his presidential candidate wife but “their grandchildren”, that same woman who holds ethics so high that she feels qualified to comment on some US and Latin football crooks that “they corrupted the business of worldwide soccer to serve their interests and to enrich themselves”; that woman meets with a person who is being investigated by her own department, allegedly discusses a future employment by the next president Hillary Clinton (see Congressional videos above), and in return makes sure that all potential charges against Hilary Clinton are dropped.

It is the same woman who is outraged by corrupt football administrators. By men who provided services for favours received. Crooks who closed both eyes before the law of their land, only to secure an advantage for themselves. It is that woman who investigates FIFA, world and regional football, and decries its corruption, nepotism and favouritism.

Are you, are we, is anybody serious?

We know how this all ended (for now): Hillary lost, Lynch lost twice. First, she lost her credibility and integrity, and secondly she lost a new job that she apparently so dearly wanted – an appointment by president Hillary – because the Clintons lost the election and that man Trump brought the bacon home.

Lynch will be gone in January but her defiling the office of the Attorney General will remain as a questionable and awful legacy. While Comey will be gone as well, if he doesn’t quit on his own beforehand. The deal didn’t work out for the unholy pair of “law enforcers”, did it? And maybe, just maybe, this is the only good thing the Trump victory has or will have delivered: it will have succeeded in revealing bias, possible corruption and a fair share of hypocrisy in the highest law enforcement office of the land.

And maybe, just maybe, Trump will go a step further and stop playing world cop, and stop seeking to export US law to foreign lands. Because as all can see, US law is hardly the kind of law that can be taken seriously when its highest representatives behave the way they did. Just like crooks would.

“[The individuals indicted today] were expected to uphold the rules that keep soccer honest, and to protect the integrity of the game. Instead, they corrupted the business of worldwide soccer to serve their interests and to enrich themselves.” This is what Loretta Lynch said about world football’s administrators. What if it applied to her own conduct in the Hillary Clinton email scandal?

·       Who hired the US PR/Lobbying firm Teneo, “the middle men for the Clinton Foundation”, to represent FIFA in Washington? Is this the type of ethics that look good when FIFA battles with ethics violations? View this video, it makes for great entertainment and is educational, to say the least: https://www.youtube.com/watch?v=ApcqXijVzYU&feature=youtu.be

·       Is it correct that Teneo are receiving USD 1 million/month for their services? What services are those? (Suggestion to Teneo: please refrain from putting pressure on this magazine as you did on journalists in the US and Germany in the past when they were trying to identify the role you are playing at FIFA and your links with the Clinton Foundation and Bill Clinton – who was the Hon Chairman of the US 2022 Bid, by the way. We shall publish any and all attempts to pressure us)