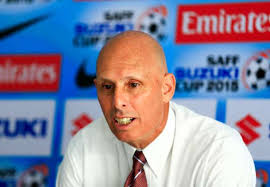 November 16 – The All India Football Federation (AIFF) have offered Stephen Constantine (pictured) a contract extension despite the disappointing results of the Indian national team. The Englishman’s contract runs out in February 2017.

The Task Force of the AIFF met in Mumbai to discuss the future of Constantine, who is in his second stint as coach of India. He failed to inspire his team in the World Cup/Asian Cup qualifiers with India finishing last in Group D, which also had Asian heavyweights Iran and Oman, and lowly ranked Guam.

Constantine, however, guided India to victory in the South Asian Football Federation Cup. India defeated Afghanistan 2-1 in the final in January 2016. Overall, Constantine has won nine of India’s last eleven matches. Yet there is a fraction within the AIFF that wants to appoint a new coach as the qualifiers for the 2019 Asian Cup are set to kick-off in March.

“This was more of a Task Force meeting,” said Bhaichung Bhutia, a member of the Task Force. “There were no names of other coaches discussed. Obviously we gave our suggestions and Kushal Das [AIFF general secretary] will speak to Constantine and then share the feedback with our president [Praful Patel].”

Bhutia is loyal to Constantine and wants him to stay. The other task force members were Henry Menezes, Kishore Taid, Scott O’Donnell and Anil Kumar. They also discussed the state of grass roots football in the country.

Local media reported Constantine was offered a one year extension by the AIFF, with qualification for the 2019 Asian Cup being set as his key target.

Former Bengaluru FC manager Ashley Westwood had been the favorite to head India before Constantine’s surprise appointment in December 2014. Westwood is once again being touted to take over the national team.