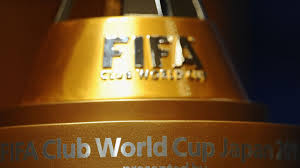 I know what you’re all thinking: it’s hard to imagine anything the world needs more right now than a new 32-team international club football competition. Believe it or not, however, there are two entities that need this innovation even more than you do: one is FIFA, the world football body; the other is Gianni Infantino, its bashful new President.

As I might have mentioned before, FIFA has been trying for decades to add a second string to its bow, the first being of course the 86 year-old World Cup.

No sports competition can claim to have been more successful over such a prolonged period.

Yet the governing body’s failure to come up with anything else has left its business model resembling a one-legged stool.

When I went through the financial documents a while back, it looked like Brazil 2014 had been responsible for no less than $2.43 billion of the $2.48 billion of revenue from TV broadcasting rights that FIFA generated over the four years from 2011 to 2014.

If you were looking to identify the real financial powerhouse of international football, indeed, both in terms of overall revenue and stability, you would turn not to FIFA but UEFA, a mere continental confederation.

UEFA can depend not only on its own quadrennial international tournament, the Euro, but also its club competitions, the Champions League and the Europa League, which have the advantage of taking place every year.

Perhaps not surprisingly, the European body’s revenue now comfortably outstrips its big brother in Zurich: in the four years between 2012 and 2015, FIFA’s revenue totalled $5.85 billion; in the four years commencing with 2011-12, UEFA’s aggregate revenue came to €8.3 billion. That amounts to nearly $8.8 billion – a lead of getting on for $3 billion.

If there is one person you can bank on to know about all of this it is the former UEFA general secretary now running FIFA, who is a self-professed “man of numbers”.

As I have observed before, FIFA finally appears to have a promising medium – to long-term prospect for its second string on its hands in the shape of the women’s World Cup.

But Infantino cannot afford to wait long enough for that to develop into a proper commercial heavyweight, or even a middleweight.

For one thing, FIFA’s finances have already taken a major turn for the worse, with 2015 generating a deficit of $122 million.

The FIFA President also has those costly campaign pledges that got him elected to deliver on, and his next two World Cup cash cows are in what look increasingly like risky-ish locations, given the mounting unpredictability of global events.

Yes there are the enviably high reserves built up by his much-maligned predecessor over a number of years to take into account. But at $1.34 billion at end-2015, these are already at the lowest level since 2012 – and who is to say they will not decline further?

To cap it all, Infantino faces re-election as early as 2019 – and, sports politics being what it is, he perhaps senses that this could be the main obstacle between him and being able to spend the rest of his professional life at the summit of the world’s biggest sport. He will want both to demonstrate that he has delivered and, perhaps if necessary, to make further expensive pledges.

And so, requiring fast results, the FIFA President’s eyes have apparently alighted on the club game he used to have such a lucrative stake in when he worked in Nyon.

Which brings us to the proposal he floated in Spanish and Italian media last Friday – at around the same time as the huge and surging value of the top-end club game was underlined by eye-popping reports of a new English Premier League deal in China – for a substantially upgraded 32-team Club World Cup beginning, ooh possibly in June 2019, that is to say just after the FIFA Congress at which he faces re-election.

I imagine clubs, who might have their own money-spinning out-of-season plans and overburdened players would demand a big chunk of the profits before allowing themselves to be roped in to such a grandiose vision.

But it will probably go down well with FIFA’s new Chinese paymasters. A brand of internet entrepreneur Jack Ma’s Alibaba Group last year agreed an eight-year sponsorship deal for the Club World Cup, and so would presumably be delighted were the competition to get a much higher profile. And – who knows? – maybe the Wanda Group, FIFA’s newest top-tier sponsor, may have its eye on selling some of the rights via Infront, its recently-acquired, Swiss-based international sports marketing arm.

Ironically, if it were to get off the ground in 2019, the most damaging consequences of Infantino’s super-sized Club World Cup might be for the women’s game that could deliver so much to FIFA in future.

The next edition of the Women’s World Cup is scheduled to be played in France in…June 2019. Such a direct new competitor could easily siphon vital TV and sponsorship dollars away from the women’s flagship, just as women’s football seemingly is getting up a full head of steam.

It is hard to think that the FIFA President would let that stand in the way of getting his organisation’s hands on a bigger share of the riches of the club game. But it is one of several issues that will have to be handled very carefully if this latest grand design is to get beyond Gianni’s crowded drawing-board.