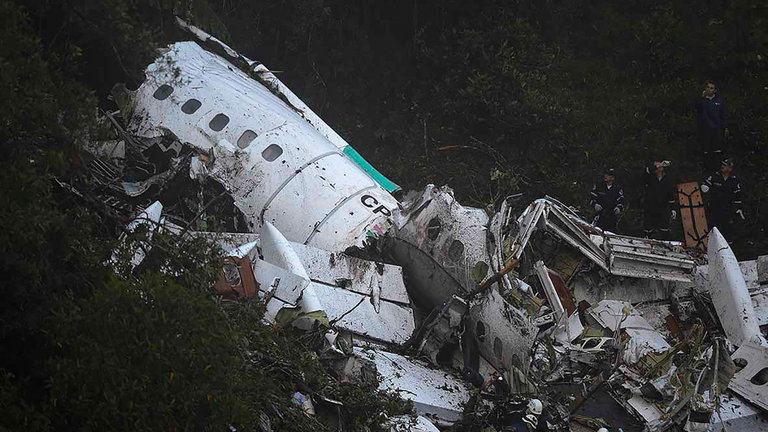 December 1 – The chartered plane that tragically crashed in Colombia wiping out virtually an entire Brazilian football team was running out of fuel, according to the pilot’s final words.

Only six on board survived, including three of the Chapecoense squad who had been en route to the biggest game in their history: the Copa Sudamericana final.

The aircraft subsequently slammed into a mountainside with only three players, a journalist and two crew members surviving, one of whom, Bolivian flight technician Erwin Tumiri, said he only saved himself by strict adherence to security procedure.

Of the three players who lived, goalkeeper Jackson Follmann was recovering after amputation of his right leg, doctors said. Another player, defender Helio Neto, remained in intensive care with severe trauma to his skull, thorax and lungs. Fellow defender Alan Ruschel had spinal surgery.

In both Medellin and Chapeco, fans paid their respects to the team which had been due to play Atletico Nacional in the first leg of Copa Sudamericana final while investigators from Brazil have joined Colombian counterparts to check two black boxes from the crash site. In the small city of Chapecó in remote southern Brazil, black and green ribbons, the team’s colours, were draped on fences, balconies and restaurant tables. Schools cancelled classes, and businesses closed, agency reports said.

Some have questioned why Chapecoense used a charter company instead of a commercial airline and why the plane did not have enough fuel for what was roughly a five-hour flight. The plane could have refuelled in the Colombian capital of Bogota, an hour’s flight away, but did not.

Chapecoense vice president Luiz Antonio Palaoro, said the LAMIA company had a solid track record of transporting soccer teams around South America without problems while LAMIA CEO Gustavo Vargas said it was at the pilot’s discretion whether to refuel en route.