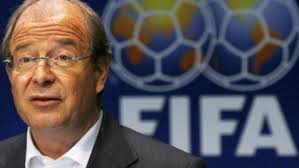 December 1 – The Swiss criminal investigation  into corruption allegations over the awarding of the 2006 World Cup to Germany has been broadened to include former FIFA general secretary Urs Linsi (pictured) who served under Sepp Blatter.

Switzerland’s attorney general’s office (OAG) last year opened an investigation into fraud and money laundering allegations against four members of the 2006 World Cup organising committee – Franz Beckenbauer, Hans-Rudolf Schmidt, Theo Zwanziger and Wolfgang Niersbach – but has now revealed it is also investigating Linsi, who was secretary general for five years from 2002 to 2007.

In a statement sent to AFP, OAG said that on November 23 “it conducted house searches with the support of the Federal Office of Police (FEDPOL) at various locations in the German-speaking part of Switzerland.”

It added tha1t the measures “related to Urs Linsi”.   The scandal first  came to light in October  last year when the German news magazine Der Spiegel published sensational claims that Germany’s 2006 organisers used a secret slush fund (€6.7 million according to the exchange rate at the time), to buy votes. The money was allegedly provided by the late Robert Louis-Dreyfus, who at the time was head of German sportswear giant Adidas.

According to Der Spiegel, DFB had borrowed the cash from Louis-Dreyfus in order to buy the votes of four Asian members of FIFA’s 24-strong executive committee.

Last March a report by law firm Freshfields report, commissioned by the German FA (DFB), confirmed that CHF10 million were borrowed from Louis-Dreyfus but was unable to conclusively say that the money was used to buy votes. The Freshfields probe is reported, however, to have mentioned Linsi 58 times.

German authorities have also been investigating the allegations and a year ago searched the DFB headquarters and the homes of a number of its senior officials.

Linsi was second-in-command at FIFA when the suspicious payment went through football’s world governing body. He has now been temporarily suspended as head of the small Zurich Bank Sparhafen. According to financial newsletter Inside Paradeplatz, he told the bank he wanted to clear his name and has denied any wrongdoing.