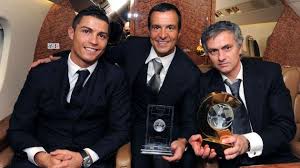 As if he didn’t have enough problems trying to defend the inconsistent displays of his Manchester United team, Jose Mourinho is now facing calls for an investigation into his tax affairs after leaked documents to a group of European media outlets suggested that he and other leading figures – most notably Christiano Ronaldo –made transactions that could be construed as tax avoidance.

The news outlets, which go by the collective name of European Investigative Collaborations and include Britain’s Sunday Times, German weekly Der Spiegel and Spanish daily El Mundo, cited documents provided by the website Football Leaks – the sport’s version of WikiLeaks – and said it plans to release further reports in the coming days and weeks.

The media consortium said it had been handed over 1.9 terabytes of data containing 17 million documents which claimed that tax havens had been used to handle millions of Euros in earnings.

One of the publications, the French investigative portal Mediapart, alleged Ronaldo and Mourinho had benefited from a so-called “tax optimisation system” developed by their agent Jorge Mendes (pictured centre), who founded the company Gestifute.

Mediapart claimed the system Gestifute employed for its various clients, using a network of offshore accounts and companies, represented a total potential loss to tax authorities of at least €185 million.

Der Spiegel claimed specifically that Ronaldo could have invested €150 million in tax havens in Switzerland and the British Virgin Islands on which he “paid only €5.6 million in taxes or barely 4%”. The German publication added the documents presented “an unprecedented look into the gloomy depths of the modern football industry” while another of the publications in the consortium, the Dutch NRC, alleged that Ronaldo moved €63.5 million  to the British Virgin Islands at the end of 2014.

Mourinho is alleged – also via advisers – to have placed €12 million in earnings from image rights into a Swiss account owned by a British Virgin Islands company in the decade to 2014. The leaked documents specifically relate to the time that Mourinho spent as manager of Real Madrid, between 2010, and 2013, according to El Mundo. The Sunday Times says both Mourinho and Ronaldo used bank accounts and companies in Ireland, Switzerland and New Zealand to process substantial earnings for their image rights.

Other players mentioned in the documents are said to include the Arsenal and German midfielder Mesut Ozil as well as Monaco’s Colombian striker Radamel Falcao.

Gestifute was quick to release a statement denying any wrongdoing by Mendes’  clients.

It added that it would take legal action against “any insinuation or accusation of that nature related” to Ronaldo or Mourinho.

Many top players in Spain have had to deal with tax issues in the past few months, notably Barcelona stars Neymar and Lionel Messi. In July, Messi and his father were sentenced to 21 months in prison for tax fraud, although they were not actually sent to jail because sentences of less than two years for first offences are usually suspended in Spain.

Last month a Spanish judge re-opened the case against Neymar and his father to stand trial on fraud charges relating to the player’s 2013 move to Barcelona from Santos. Barca president Josep Maria Bartomeu and his predecessor Sandro Rosell, who used to play a key role in the European Club Association, are also set to stand trial after Brazilian investment group DIS – which owned 40% of Neymar’s third-party rights when he completed his transfer – complained they had received less money than they should have done because part of the fee was concealed.

In June, Barcelona paid a fine of €5.5 million to settle a separate case brought by Spain’s tax authorities. In that agreement, the club acknowledged it made “an error in the fiscal planning of the player’s transfer”.

Spanish prosecutors are also reported to be seeking a prison term of more than 10 years for former Barcelona striker Samuel Eto’o for alleged tax crimes committed when he played for the Catalan club.

Image rights are separate to salaries paid by clubs and politicians in both Spain and the UK have called for urgent investigations into the latest accusations which Gestifute insists are baseless.

Gestifute’s full statement is as follows:

In March 2016, a number of different companies connected to the world of sports were victims of a cyberattack in several European countries, including Spain.

After more than eight months since the attack, in the past weeks Gestifute, its clients, advisors and other entities related to Gestifute have received detailed enquiries from various media organizations which are all members of a pan-European consortium.

The tone used in the various questionnaires that were received is insidious, disrespectful, threatening and a far cry from the most basic standards of journalism’s best practices.

Particularly, a newspaper, which was initially not part of the consortium and which, according to the prohibitions ordered by the Spanish Court, claims to work alongside with it, has become a necessary cooperator of the referred consortium in order to try to attack the interests of Gestifute and those of its clients, thus trying to avoid its alleged legal responsibilities in the dissemination of manipulated, distorted, biased and stolen information.

One newspaper makes the unfounded allegation that Gestifute, its clients and its advisers of having, directly or indirectly, created, organized or designed tax structures to facilitate tax evasion using tax havens. The most serious and malicious allegations in the enquiries relate to José Mourinho and Cristiano Ronaldo.

Furthermore, today news have come out insinuating a reprehensible conduct by Cristiano Ronaldo and questioning his good name.

In this regard, Gestifute publicly states that:

Both Cristiano Ronaldo and José Mourinho are fully compliant with their tax obligations with the Spanish and British tax authorities.

Neither Cristiano Ronaldo nor José Mourinho have ever been involved in legal proceedings regarding the commission of a tax offense.

Any insinuation or accusation made to Cristiano Ronaldo or José Mourinho over the commission of a tax offense will be reported to the legal authorities and prosecuted.

In addition, Gestifute publicly states that:

We always act with the highest level of professionalism in our relationships with our clients and the authorities in all those countries in which we operate.

Our goal as a company is to provide the best advice to our clients, always within the framework of the applicable law at the time in each country we operate.

European tax authorities have different criteria in terms of image rights and foreign clients are often affected by these differences, which they respect and abide by. In any cases in which there have been disagreements with the respective authorities on the tax criteria to be applied, these have always been resolved by agreement with the authorities without legal proceedings ever being necessary.

We will not hesitate to take legal action to defend ourselves and our clients over any untrue and unlawful allegations published about us.”